Leveraged Freedom Chair Is A Wheelchair For The Off-Road 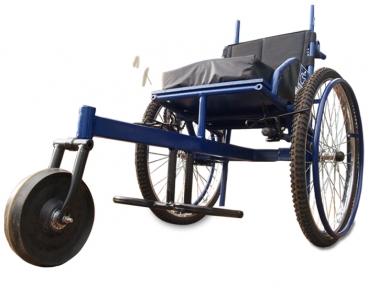 Wheelchairs are awesome for giving mobility to the people who can’t use their legs .  In many places where the ground isn’t necessarily as smooth and flat as your driveway, though, they’re practically impossible to use.   The new Leveraged Freedom Chair seeks to solve just that, providing a comfortable chair that can run as well on mud and rocks, as it does on regular roads.

Invented by MIT PhD candidate (for mechanical engineering) Amos Winter, the chair is described as a desk chair/mountain bike hybrid.  He claims it’s “something you can comfortably sit in all day and maneuver around the office, but also use to efficiently commute to and from work.”  It’s basically a chair even those with power on their legs can use to become completely lazy – which is absolutely my kind of thing.

The Leveraged Freedom Chair does away with the limitations of hand-rim propulsion chairs, which are virtually impossible to maneuver over rough terrains and long distances.  It uses a converted bicycle drivetrain that’s connected to two large levers which aid mobility when traversing difficult paths.  The levers control the chair’s mechanical advantage, allowing it to produce increased torque when the rider moves their hand position.   Since it’s constructed entirely of bicycle parts, the system can be built and repaired anywhere with access to bike equipment.

Amos is currently tweaking the design, on a grant from the Inter-American Development Bank.  He’s also finished testing several prototypes in an African rural area and estimates that large-scale production may not be too far in the horizon.