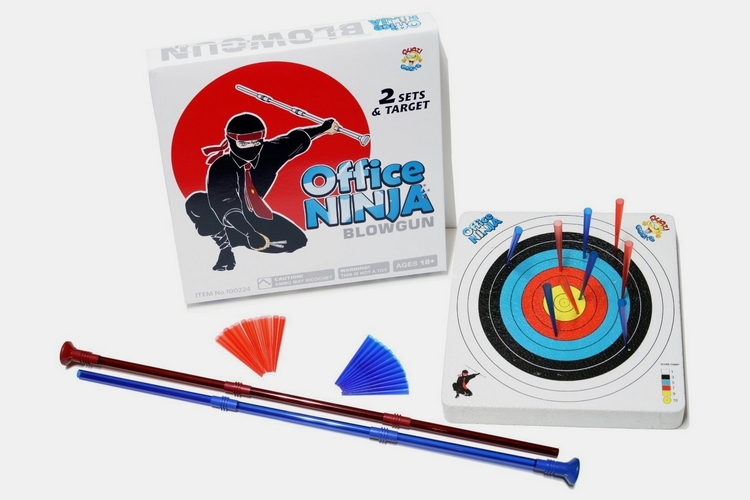 Shooting at your co-workers with foam-loaded blasters is fun. Problem is, it’s not exactly appropriate when you’re trying to play a ninja battling gun-toting opponents. The Office Ninja Blowgun just might be what your arsenal has been missing.

Designed to resemble the blowpipes ninjas used to stealthily hurt their opponents, the toy lets you pelt your fellow combatants with soft darts during battle. That way, you can stealthily make your way from cubicle to cubicle, all while attacking with the same quiet execution the way a real ninja would.

The Office Ninja Blowgun is, basically, a toy pipe that you can use to shoot tiny plastic darts onto any target by simply blowing into it. Like the ninja specialty it’s based on, it’s lightweight and inconspicuous, making for a much more discreet weapon to bring to battle compared to the Nerf blasters the rest of your co-workers usually carry. And while it won’t have the same power or range as the badass blasters of today may leave you at a disadvantage, the limited range does make it feel more authentic like a proper ninja weapon.

When you launch one of the darts using a short, sharp and forceful exhalation of breath, the projectile shoots out accurately at distances of up to 11 feet, so while you can’t quite carry out an attack from long range, you could fire your shots from a rather comfortable distance. Why just 11 feet? Mostly because the darts are made from a soft and lightweight plastic material, a decision that was made to ensure the darts don’t end up hurting people when they come in contact with your skin. So, yeah, you shouldn’t worry about hurting anyone with this. Do note, you will want to make sure to always aim away from the eyes because, while the darts are meant to make contact gently, the eyes could still be a little too sensitive for it.

The Office Ninja Blowgun measures 30 inches long when assembled, so it’s not exactly something you can put in your pocket on the go during battle. Unless, of course, you break it apart and only put it together once you’ve chanced upon a target just like a real ninja would. It comes with a Styrofoam target that you can use to pass time in your cubicle when you co-workers are too engrossed in their own assignments to join you in battle.

Are the darts sharp? Nope, but they have semi-conical tips that can burrow itself onto the Styrofoam target just like a real dart would, all while causing zero harm when hitting skin. Do note, the lightweight build of the darts mean it’s going to be very hard to keep them flying at a straight trajectory for very long, which is why they recommend a distance of 11 feet max to ensure the dart actually follows your aim.  And, yeah, it probably makes them pretty useless in the outdoors, especially on a windy day.