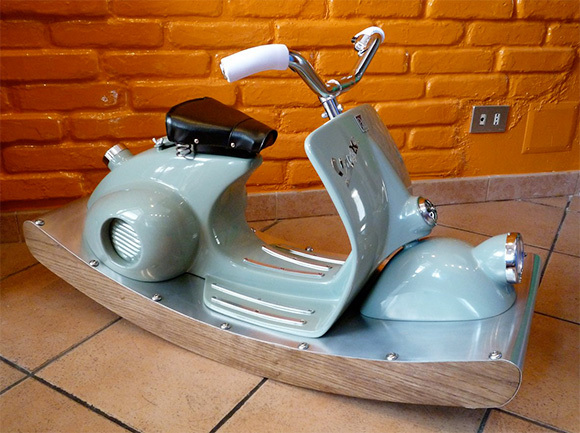 Who needs an Xbox 360 when you’ve got a grandpa who can whip up an awesome rocking horse?  No one.  Everyone neeeeeeds an Xbox 360.  But a Vespa scooter transformed into a child’s rocker should be quite a crazy thrill all the same.

Yep, some kid’s grandpa tore apart an old Vespa and retooled it into an awesome rocker.  The scooter’s body looks in good shape too (probably restored it), complete with headlights, faux-leather seat and a spit-shine finish.  Just look at Diego’s face as he rides and goes nowhere on that thing: 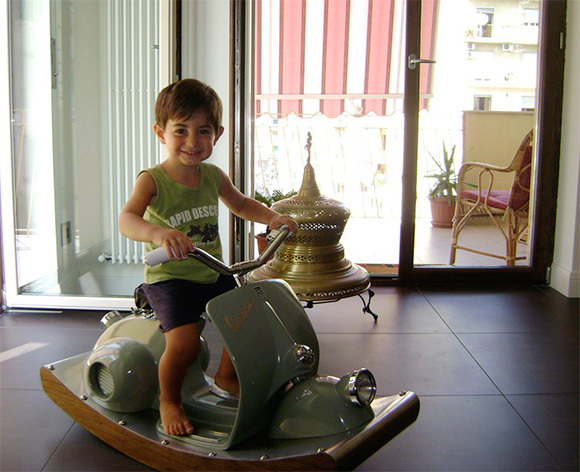 The recycled (or upcycled, if you want to be trendy and sound lame) Vespa body sits atop what appears to be a wooden rocking platform wrapped in stainless steel.  It looks machined to perfection, as only really skilled hands can do.

Sucks grandpa doesn’t do instructables because I would really like to know how he fashioned this creation.  Not that I’d actually get up from my comfy chair to do one, but I can get my henchmen to read it and build one for me.   Not for my kids – for me.   Except I don’t want a Vespa body – I want a stuffed 100-year old crocodile with its mouth open (to show those sharp teeth) and a moving tail.  Yeah.  I’ll be cooler than Diego then.