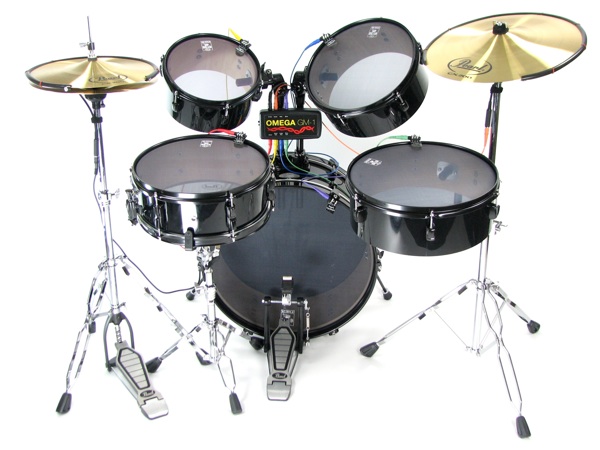 Rock Band is cool.  If you want to feel like a real rockstar, though, nothing beats pounding on a  loud, obnoxious drum kit.  Now, you can do both at the same time.  Omega Music Technology’s new GM-1 system lets you plug in your real drum set into your favorite rhythm titles – that way, you can play your geeky game while getting actual practice time in.

Can’t play drums for real?  Not a problem, according to Omega, who are heralding the system as a great way to learn the instrument.   Makes sense, too, since you’ll be whacking sticks on real skins and cymbals, just like in an actual lesson.

Omega GM-1 uses multiple sensors (tech triggers for the skins, special triggers for the cymbals and hi-hat) for the drums, detecting every hit, smash and roll with claimed “speed and accuracy.”  It won’t connect to the console itself, so you’ll still need one of those pretend drums for Guitar Hero and Rock Band.   Once hooked up to the control, the system takes care of converting all the real drum hits to electronic signals.

For those who’d rather not subject their roommates to the torture of listening to their talentless attempts at being the next…uhm…Sheila E., the system includes mesh heads (with switch included) and chokes for the cymbals.   It uses four AA batteries, estimated to last gamers at least a month.

Yep, you can finally waste your life on Rock Band and charge it to “learning to play the drums.”  You can buy the Omega GM-1 as a basic system ($249) or with a Pearl Drum set.  Pricing for the latter will depend on the actual kit you pick up.