One Good Earbud Mixes Stereo Channels Into One Ear 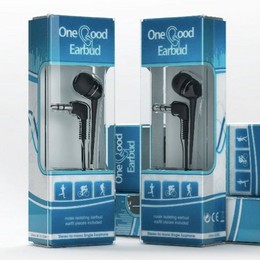 Two earbuds make sense because you have two ears.   Except plugging both at the same time can obscure the sounds of the outside world — a terrible idea when you’re jogging at an intersection and a car’s about to pop out of the corner.   That’s why you should be wearing the One Good Earbud instead.

Why not just use a regular pair (like these cute Sony Qlasp earphones, for instance) and take out one bud?  Because you only get half the music that way, making even a great song sound sub-par.  Plus, an ear bud hanging out both looks and feels awkward.

One Good Earbud is produced in three styles: the Pro (traditional in-ear), the Mobile Pro (with built-in cord mic) and the Wrap Around (for sporty types).  All three come with a 3.5mm plug, three sizes of soft rubber ear tips and a 42-inch cord to make sure you can move freely.

The single-bud setup’s internal circuitry is wired so that it mixes both left and right stereo channels into a single output.  That way, you get to enjoy the full range of audio in the original track, all while freeing up one ear so you can hear the world at large.

We’ve all seen the movies.  Aliens land in public, begins to shoot people, and the guy with the earbuds who remains oblivious to what’s going on gets killed.  Don’t be that dude.  You can get the One Good Earbud now directly from their website.  Prices are $19.95 for both the Pro and Wrap Around models, and $29.95 for the microphone-packing Mobile Pro variant.