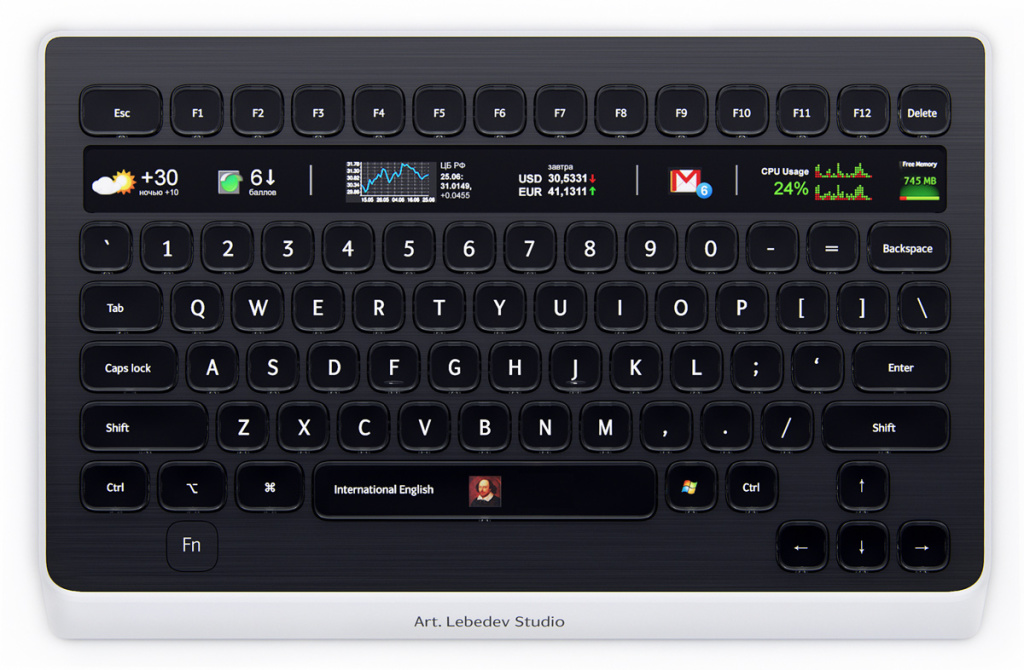 The Optimus Maximus keyboard was admittedly pretty awesome.  Burdened with a ridiculous price tag ($1,599.99 on Thinkgeek), however, we doubt they sold a crapload of it.  Chances are, the Optimus Popularis will suffer the same fate.  Regardless, that doesn’t make it any less fantastic.

Like the Maximus, the new PC peripheral comes from Art Lebedev’s studio and it, frankly, looks even better.  Sized in compact form, it ditches all those other keys to the right of the “ENTER” since, let’s face it, they’re useless in a keyboard whose keys can literally change what characters are assigned to them at the push of a button.

Each well-spaced key in the Optimus Popularis gets a dedicated screen, just like its predecessor.  This time, though, they stretched the screens as far as they can go, such that they take up as much of the tile as possible.  That means even larger, sharper displays can be made (the Maximus had 48 x 48 pixels while the Popularis gets 64 x 64), making for more visually-stunning customizations.

One crucial addition here is a wide screen below the function keys that lets you display a variety of widgets, from weather to CPU statistics to Gmail (hopefully, it allows you to program your own too).  We’re not sure if that strip is touch-enabled or if you’re supposed to pair the display with the function keys, but we’re hoping it’s the former.

According to the Optimus Keyboard blog, the Optimus Popularis will ship between the end of 2010 and early 2011, with pre-orders set to begin later in the year.  Price isn’t fixed yet, but they’re claiming it will be under $1,000.  That means, expect it to retail for $999.99.