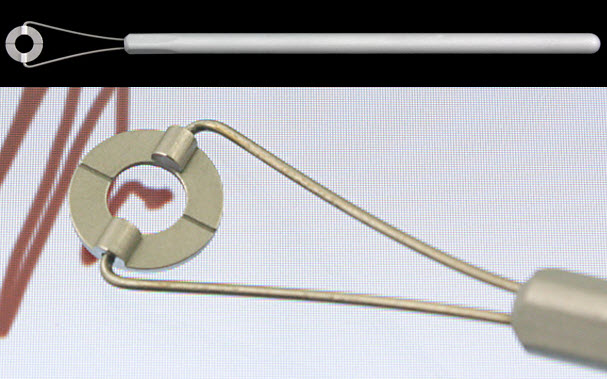 Touchscreens have become an awesome platform for drawing apps.  The only problem: your finger (or even a capacitive stylus) is always blocking whatever you’re currently committing to the screen, making precision a difficult affair.  The oStylus pen offers a solution, using a see-through round tip so you can see exactly what’s being drawn when you move it along the display.

Designed by Canadian jeweler Andrew Goss, the accessory seems partly based on some jewelers’ tools, which allow for precise control over materials without roughing them up.  The same care is taken here, as the washer-like tip constantly swivels  to remain flat against the screen’s surface, with a vinyl film lining it to avoid damaging your gadget’s screen.

The oStylus gives you a solid aluminum handle to wrap your fingers around, with a moveable titanium wire attached to it, holding the stainless steel tip.  It’s an unusual design, to say the least, but it apparently works very well as a drawing tool, with the wire and tip adapting position, regardless of the angle you’re holding the pen in.  This, aside from the obvious upside of never having to guess what’s ending up drawn on the touchscreen again.

According to Goss, the pen’s see-thru operation, combined with the iPad’s zoom in and zoom out functions, allow for some painstakingly detailed work.  It mimics the length and weight of regular pencils and brushes, sporting 6.75 (length) x 0.25 (diameter) inch dimensions and weighing 0.4 ounces.

The original numbered limited-edition oStylus goes for $75 each.  If you don’t care for such exclusive nonsense, you can get the regular variety for a fair-sounding $37.50.