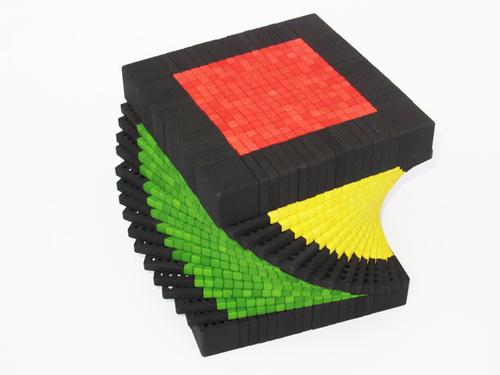 I can appreciate a good puzzle.  A tough puzzle, however, just makes me want to punch myself in the face.  Forget punching, though — I’ll just stop breathing on the spot instead of solving anything like this Over the Top Cube.

Created by longtime puzzle designer Oskar van Deventer, it’s unofficially the world’s largest cube puzzle.  And it’s only unofficial because the guy from the Guinness Records who looked at it volunteered himself into a mental facility after trying to solve it for days.  True story.

Over the Top is a 17 x 17 x 17 Rubik’s Cube, consisting of  1,539 laser-printed pieces that were assembled over five hours.  It measures 5.5 inches long in every direction, so you can still cup it with two hands — we’re just not sure you can solve it without sending your brain into an instantaneous meltdown.

According to the designer, it only took three printing attempts to get the pieces just right.  Honestly, I think it’s still all wrong.  Thinking about even trying to solve this thing is giving me a headache.

Oskar is bringing his Over the Top Cube to the New York Toy Fair in February, which should finally make it the official largest cube puzzle in the world.  Want one?  You can order it from the Shapeways website, priced at around $2,000.