Painless Laser Epidermal System Gives You Meds With No Needles, No Pills 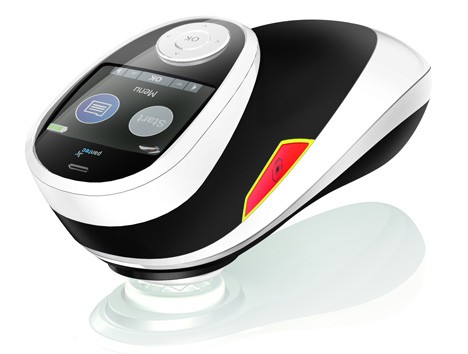 Can’t stand needles? Hate downing pills? Well, you may no longer need to do them in the future with the Painless Laser Epidermal System (aka P.L.E.A.S.E.), a new drug delivery system that puts meds into your body by shooting you with lasers. Pew pew, indeed.

Created by Pantec Biosolutions AG, the transdermal drug delivery method works by blasting your skin with lasers to create micropores where medication can be absorbed. The process is touted to be completely painless for all parties involved (both the patient and the doctor), unless somebody mistakenly arms the laser with deadly force and films the ordeal with the cellphone. That should become my favorite YouTube video ever… for the next fifteen minutes anyway.

P.L.E.A.S.E. uses a handheld device to deliver the payload, which the operator controls via an integrated touchscreen interface. The lasers will only blast through the outer layer of skin, right before the dermis, so it won’t puncture any nerves or blood vessels. It uses strictly short pulses to avoid thermal damage, with variable laser deflection (for making multiple micropores in an array) and very accurate shooting.

According to the company, the system is so simple to use that both medical personnel and the patients themselves can administer the laser operation, even without supervision. Of course, if that patient’s one of those clowns who like to tinker with stuff, we suggest strict supervision. That bastard might arm it and bring down the whole hospital. We don’t know how he could possibly do it, but I’ve read enough comic books to be wary. Very, very wary.

The Painless Laser Epidermal System just received marketing authorization in the EU, which means it can now be sold to aspiring supervillains and laser enthusiasts. I know, this laser’s probably too benign to be weaponized, but it sure sounds more interesting than playing with another lightsaber.