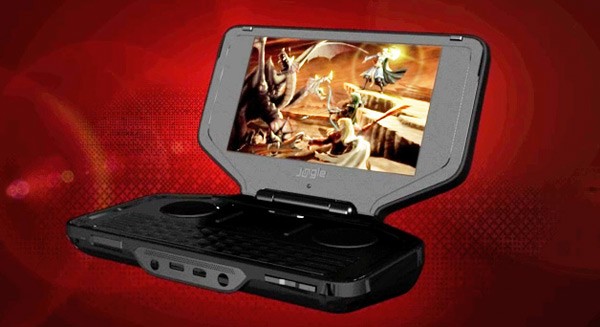 Let’s be honest: MMORPGs are best played all the time.  Soon, you can do just that with the Panasonic Jungle, a handheld video game console designed to feed your MMO addiction.

Manufactured under Panasonic Cloud Entertainment (a subsidiary company), much of the device is still under wraps, so there’s not a lot to go on.  Obviously, they’re hoping it can go viral before releasing the full details, as they’re working a few teases here and there.

The Panasonic Jungle is a clamshell rig that looks like a slightly smallerversion of those portable DVD players with their own screen (yes, it’s big).  Display occupies the top half, with dual touch-sensitive d-pads and buttons at the lower panel.  There’s a full QWERTY keyboard, too, which means they’re planning to use this for more than just games. A skew of ports are also available, including ones for a 3.5mm jack, a micro-USB and a mini-HDMI.

Main thrust, though, appears to be positioning this as an online gaming machine with access to plenty of on-the-cloud content, so we expect both 3G and WiFi on there.  It appears to be running an unspecified flavor of Linux.  Only one game has been confirmed to be developed specifically for the handheld, Battlestar Galactica Online, which sounds like a browser-based Flash game, making this sound more of a MID with gaming buttons.

In truth, we’re not exactly sure what they actually have with the Panasonic Jungle.  Let’s hope, for Panasonic’s and my curiosity’s sake, this brings something different to the table than the glorified MID I’m expecting.  Expect the company to ramp up marketing within the next few weeks.