Tablets Can Be Rugged, Too: Panasonic Toughbook Android Tablet 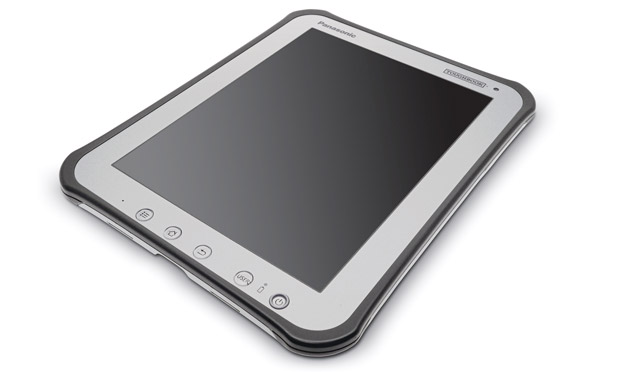 We all know that Panasonic’s Toughbook line has some of the most rugged notebooks in the market.  And they want to bring that same durable styling into tablets with the just-announced Toughbook Android Tablet.

Billed as an “enterprise-grade Android tablet,” it’s realistically the first product for the category that’s been equipped specifically for both field work and corporate use.  As such, it’s not only furnished for durability and real-world reliability, it’s getting a heaping of security additions embedded at the hardware level, too.

Normally, you’d have to dress up that $500 slab of tech in durable casing if you want to ensure your tablet’s safety when taking it on the road.  Not the Panasonic Toughbook Android Tablet.  Just from looking at the case, you can tell that from the beefy edges, thick profile and ummm… general unattractiveness.  There, I said it.

It will get all the usual mobile accoutrements: aGPS, WiFi, 3G/4G and all that.  Display is a 10.1-inch XGA screen, with capacitive touch sensors, a non-glossy cover (so you can view it under sunlight) and stylus support.  No word on what version of Android it will run, but we’re guessing it needs to be heavily modified if they’re going to throw in a bucketload of security add-ons.

For now, it doesn’t sound like the Toughbook Android Tablet is anywhere near finalized in terms of specs and design.   In fact, it’s highly likely the actual product will look very different from the renders.  Panasonic claims they’ll have it ready sometime in the fourth quarter, though, likely for corporate and government users.