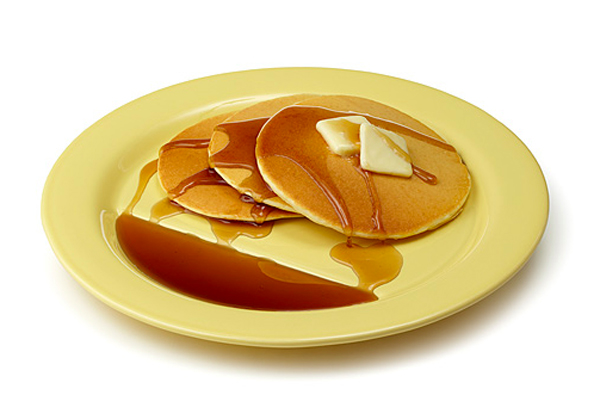 You love your pancakes.  So much so that you’ve asked your boss for a loan to buy a Chefstack Pancake Machine (it was denied).  But you love your flapjacks better when they’re dripping in gobs of syrup.  Problem is, you have to keep pouring before every bite to maximize the “soaking in syrupy goodness” effect.  Not with the Pancake Plate, which adds a reservoir on one side for collecting all that runaway syrup so you can just dip in before putting a slice your mouth.

Designed by Jon Wye, the plate has been fashioned as an ideal companion for the omnipotent breakfast stack.  Nothing makes pancakes taste better than sweet, thick and sticky syrup, after all — and this dish lets you drown each bite like no other before it.

The Pancake Plate measures 12 inches in diameter, so you can hold a sizeable stack on it comfortably.  Unlike regular plates, though, it features a raised edge that gently slopes toward one side, where a bank for pooling loose syrup sits minding its own business.  That way, you just dip each bite to get more syrup on it, instead of scraping off from the plate or picking up the bottle to pour just a little bit more.  The plate is made from ceramic.

Since there’s no law banning you from using this for other food, this should make a nice plate for anything that you prefer to eat with a lot of sauce.  Whether it’s meatballs in cranberry sauce, fish fingers bathing in chili gravy or chicken drowning in cream sauce, this thing should work as the perfect dip-enabler.

Uncommon Goods sells the Pancake Plate in sets of two, priced at  $45.