Paravelo Flying Bicycle Looks Both Dangerous And Loads Of Fun 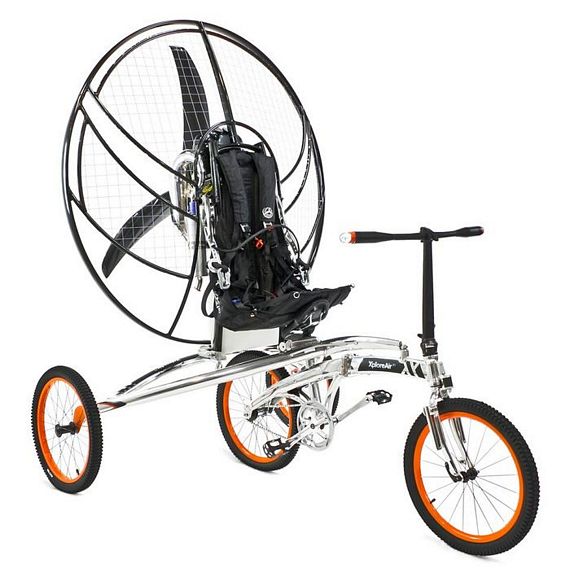 Flying cars?  We still can’t ride one to work.  Jetpacks?  Nada. Maybe the world will have a better shot at realizing the dream of flight commuting with the Paravelo, a flying bicycle.

No, it’s not another one of Thinkgeek’s joke products (at least, I don’t think so).  April Fool’s has long gone, after all.  Made by XploreAir, it’s a (supposedly) real flying bicycle that you can take both pedaling on the road and cruising high up in the air. 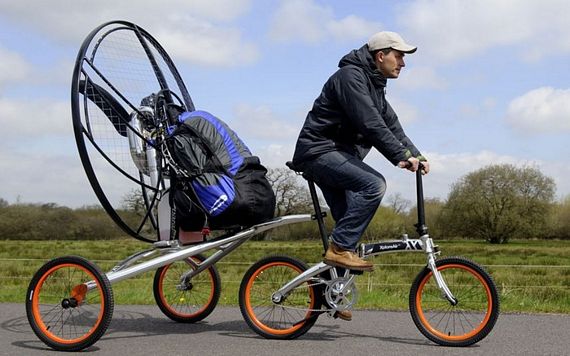 The Paravelo is actually a conventional two-wheeled bicycle with an attached trailer that gives it a flexible wing and a giant biofuel-powered propeller.  The trailer can be hooked up in two ways: either to the seat post or to a designated spot on the frame near the fork (in which case, you use the chair on the trailer for your seat).  Both configurations will allow the vehicle to take off for flight, although only the first variation will allow it for use as a bicycle (you’ll be taking off on foot in the the former configuration).

We’re not sure how exactly this thing flies(I mean we do, there is a video of this thing flying on the Kickstarter page also), but the “advanced prototype” supposedly does — up to 25 mph on the air at heights of up to 4,000 feet.  The product page claims that the para-trike design “heralds an era of safe, practical and affordable personal flight,” although the idea of “safe” on this thing doesn’t quite tally.  Seriously, I’m both scared and excited just thinking about it.

XploreAir has currently taken to Kickstarter to procure more funding for further development of the Paravelo.  In particular, they’re looking to transform the existing prototype into a rugged aircraft, so it can be used for expedition duty.  Chances are, they will still be a long way off from a production run, but you can help speed things up by putting down a pledge.  You can learn more from the link below.