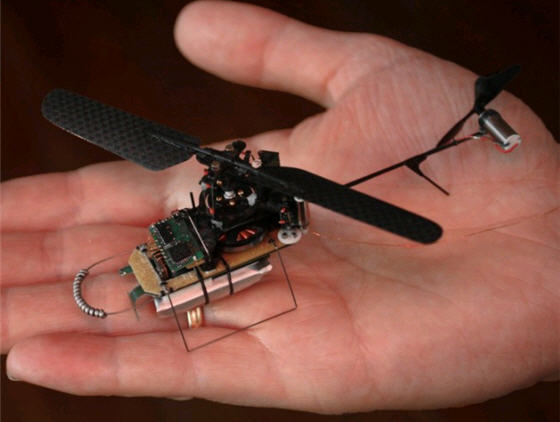 Small palm-sized choppers usually look like fun toys.  This one, however, is designed for soldiers and military applications, instead of your usual afternoon in the park.  Called the PD-100 Black Hornet, it’s a nanocopter that comes equipped with the latest in spy surveillance technology.

Developed by Prox Dynamics, the minuscule aircraft can hover, accelerate and decelerate much like a real helicopter using  what the company describes as the “smallest and lightest control servos in the world”.  Paired with a capable image capture device, it can take aerial close-ups of some of the most difficult installations to provide situational awareness.

It weighs a light 0.5 grams and comes at a way smaller size than any RC helicopter available in the market.  Using 4-inch rotor blades powered by an electric motor, the Black Hornet can travel at speeds of up to 20mph both indoors and outdoors on light winds.  Slower travel might be expected for harsher aerial conditions.

A remote control unit sporting a color display ships with the device, allowing the user immediate access to images it’s recording, along with flight data and terrain maps.  Both the actual aircraft and the control box run via separate rechargeable batteries.

The PD-100 Black Hornet will be sold in packs of three with pricing still to be determined.  Prox Dynamics claims it will be developing both civilian and military versions of the the device, although it’s only intended for government use at the moment.  Once this goes out, though, I’m pretty sure it’s just a matter of time till the rest of us get something similar – enemies beware!