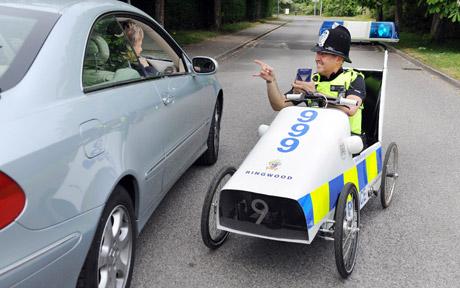 South England’s Hampshire Police just unveiled a new patrol car. And it looks the child-size toy police car I had when I was six.

Not only does the ride look like a child’s toy, it was actually made by police with the help of teens, aged 13 to 16, too.  According to local law enforcement officials, the project is part of a drive that strives to make police appear “cooler” and “more approachable” to young people.

Designed to ride one cop at a time, the vehicle appears no more sophisticated than a go-kart with a pedaling system installed. Well, that’s kind of exactly what it is, except it’s reinforced with a roll bar (for crash protection), flashing blue police lights and an annoying siren. The underpowered police car has five gears and can be operated at a top speed of 20 mph.

Since it’s not exactly a vehicle you can use to apprehend suspects driving cars with real engines (I bet even bicycles leave it in the dust), it will likely be treated as a novelty for the department than an actual car for field duty. In fact, they’re entering it in the British Pedal Car Grand Prix slated for July 11 in Ringwood, Hants, to further bring the Hampshire Police closer to the community.