This Pepperoni Bedding Turns Your Bed Into A Giant Pizza Slice 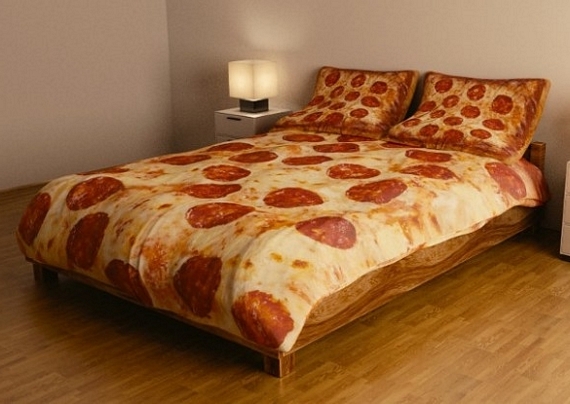 After discovering the wonder that is the greasy sausage pillow, I’m utterly convinced that life will be so much better if my entire abode found itself covered in household items that look like delicious food.  Acquiring this Pepperoni Bedding will definitely be a step in that righteous pursuit.

A comforter and pillowcase set that look like they’re covered in cheese and pepperoni toppings, it turns your bed into a veritable slice of giant pizza.  That way, you can lay your head on greasy pizza pillows and cover yourself in a greasy pizza blanket, while you dream of the delicious pizza you had for dinner, which you can still definitely taste because you forgot to brush your teeth before hitting the bunk.

Don’t worry about the greasy-looking print on the Pepperoni Bedding.  We’re pretty sure it just looks like it’s oozing cooking oil because they chose the oiliest slice they can photograph for greater realism.  I mean, unless there are groups of people who like to sleep in oily beds because it makes them harder for aliens to abduct in the middle of the night or something.  Nah, those don’t exist.  The people who sleep in oil, I mean, not aliens.  Aliens are real, I saw crazy-looking people in a documentary talking about them.

Made by Emotional Rainbow, the Pepperoni Bedding comes in four quilt sizes, Queen, Full, Twin, and European,  and one pillowcase size, 24 x 19 inches (w x l).  The beddings ship all the way from Europe, though, so, unlike your local Domino’s, we doubt they can deliver it in 30 minutes or less.

The Pepperoni Bedding is available now.  Price varies depending on size, but it starts at €52 for the twin.