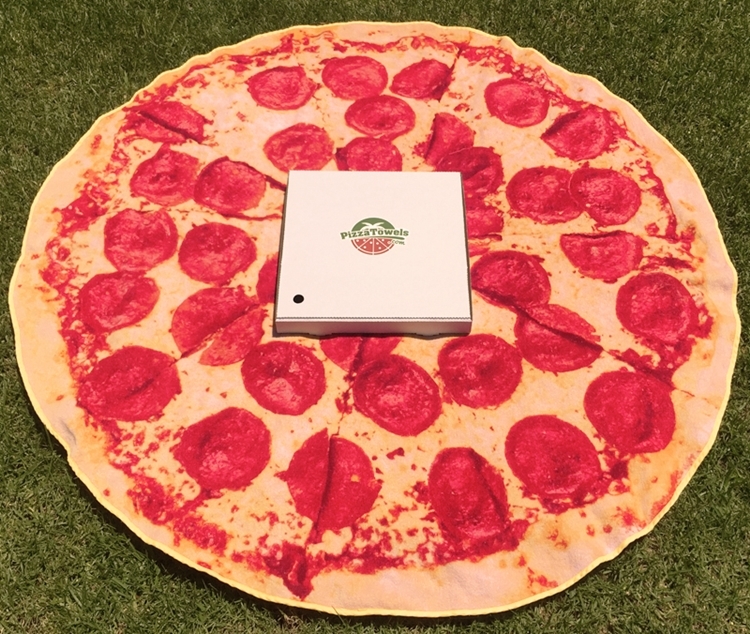 Your bed has never been the same again since it’s been graced with a Pepperoni Pizza Bedding. Simply put, it became the most wonderful place on earth. Which is why you miss it so much every time you’re away. While you can always bring along a backup bedding to your trips, so any bed you sleep in can be as awesome as your bed at home, we have a feeling this Pepperoni Pizza Towel will work a whole lot better.

A beach towel, it won’t take up a substantial amount of space in your luggage, making it a better traveling companion than a full-size bedding. With a pepperoni pizza print that’s just as detailed and realistic as the one in your bedroom, it will make any place you lay it down on just as wonderful, whether it’s the sand on the beach, the grass on the park, or the boring hotel bed with all-white sheets.

The Pepperoni Pizza Towel is an oversized round beach towel that measures 5 feet in diameter, making it look like a giant pie when laid down on any surface. It’s not quite as greasy-looking as we would have preferred (everybody knows only the greasiest pizzas make the best towels), but given the lack of options in beach towels that look like giant pizzas, we’ll take it. Even better, the whole thing ships inside an actual pizza box, so someone’s literally delivering pizza to your door when you get one.

Made by Sydney-based Pizza Towels, the Pepperoni Pizza Towel is priced at $59.95.