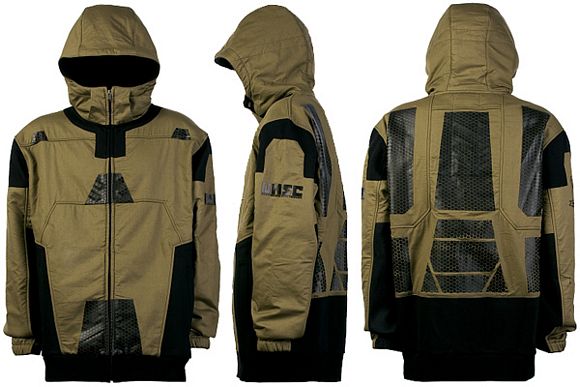 Ecko’s Star Wars hoodies are pretty awesome.  Being a non-fan (I never saw a single film, if you can believe that), however, they’re not all that attractive to me.  The upcoming Halo 3: ODST, on the other hand, is something I can absolutely relate to (having been waiting for it since news of the title first broke).  As such, my closet will always have a place for Ecko’s new Master Chief Hoodie, a fully-fitted hooded sweatshirt clad in the design of the game’s main protagonist.

Dressing up in a video game character’s outfit is so dorky, that it’s completely inappropriate to do so, unless you’re attending a convention or a costume party.  Slap the same design on a zip hoodie, however, and it looks perfectly acceptable (yes, you can still get dates even while wearing it).  Heck, it’s actually way cooler than rocking another sweatshirt with your favorite skate company’s logo emblazoned across the front, don’t you think?

The snazzy streetwear clads itself in Master Chief Petty Officer John-117’s full upper-body get-up, mimicking the lines and color blocks without going over the top.  It features a zippered front design, with velcro closing for  the hood.  Hoodie is made from 80% cotton and 20% polyester fleece, with nylon overlay, nylon welt pockets, and rib-knit cuffs and hems.

Naturally, the Master Chief Hoodie’s release will coincide with the launch of Halo 3: ODST, as part of a line of eight different clothing items from Ecko (some gaudier than others, you’ve been warned).  You can order now, directly from the company’s online store, with shipments slated to commence starting October.  Price is $88.