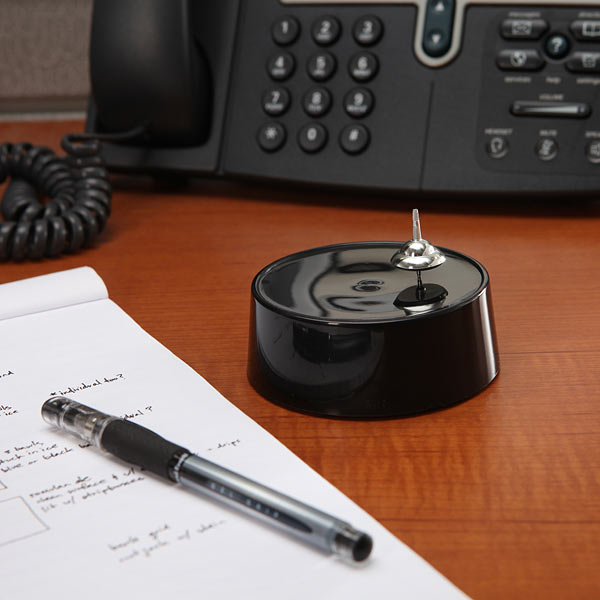 I like my movies simple.  Bad guy does bad.  Good guy gets hurt.  Good guy gets revenge and creates a spectacle of explosion in the process.  Sometimes, though, watching a dense movie like Inception doesn’t hurt.  Even if all I could remember from it is that spinning top that doesn’t fall over at the end.  At least, I’ll get the joke when I see this Magnet-Powered Spinning Top sitting at the boss’ desk.

A novelty desktop toy, this puts a perpetually spinning top running its dizzying course over a magnetic platform.  Perpetually, that is, until the included 9-volt battery dies out, at which point you’ll realize you weren’t in a dream after all and you spent the entire week watching this ridiculous thing while trying to fly.  Man, your life sucks.

The Magnet-Powered Spinning Top comes with two parts: a top measuring 1 x 0.75 (d x h) inches and a base that measures 3.5 x 1.25 inches (d x h).   According to the Thinkgeek, there’s no actual dreaming necessary to make it work.  Instead, the top itself has a radially oriented magnetic field, while the base packs a conducive coil.  As the top slows down and spins past the center, it induces a current in the coil that temporarily powers up the electromagnet, which then delivers enough torque to speed up the top once again.  That goes on and on until the battery is no longer able to power up the electromagnet.

While it’s not an official Inception merchandise, there’s no denying what this toy will bring to mind as soon as anyone sees it.  The Magnet-Powered Spinning Top is available now, priced at $9.99.