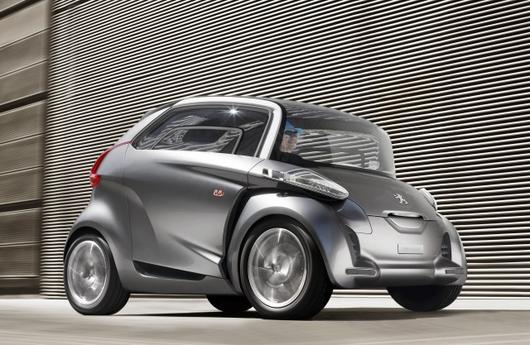 Last week’s 63rd Frankfurt Motor Show laid witness to plenty of visually-distinctive vehicles.  When it comes to craziness, though, few came as close to the downright insanity of the Peugeot BB1 electric concept car.

Named after the famous motorized bikes from the 1960s, the BB1 literally seems like a cross between a scooter and an ultra-compact car, coupled with the most eccentric designs the French can come up with.  Accommodating as many passengers uncomfortably appeared to be the order of the day, as the Smart-like electric rider fits in four seating areas (all three passenger seats are removable) within its 2.5 meter long body (which the company claims can probably park legally in a position perpendicular to  pavement edges). 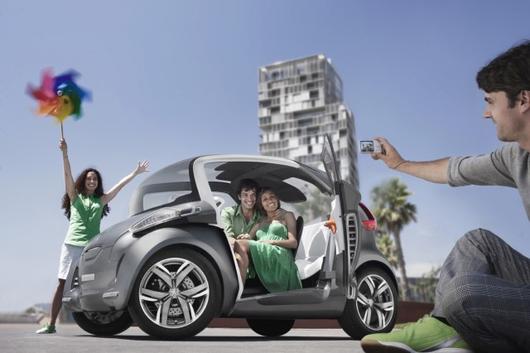 Suffice to say that the Peugeot BB1 isn’t the easiest ride to figure out.  Sure, it has four wheels, two doors and a car-like body.  Driver seating is much more scooter-like than usual, with no foot pedals and no steering wheels.  Instead, you manage it using moto-style handlebars.  Reverse opening doors make it easy to slip in and out of the car, while the forward-pushing shell, which gives it the appearance of motion even when still, looks more apt for a cartoon render than actual street fare (it morphs to solar panels on the roof, so there may be some design factor there). 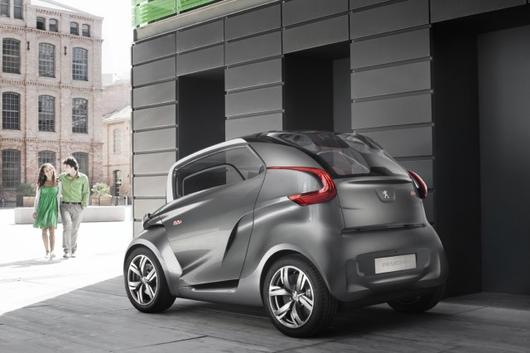 Drive is provided by two electric motors, one for each rear wheel (it uses last year’s Michelin in-wheel design), allowing the BB1 to maximize its limited interior space despite touting two lithium-ion battery packs.  Together, the motors generate a maximum power output of 15 kW (20hp), managing decent start-up times (0 to 19 mph in 2.8 seconds) and in-gear acceleration (19 to 37 mph in 4 seconds) over an effective range of 75 miles.  Weight, including the battery panels, are no more than 600 kilograms, making it insanely light.

“What the hell was that?” wouldn’t be so unusual of a question to ask about the Peugeot BB1.  Being merely in the concept stages, though, the half-bike, half-scooter should be an interesting study about what the future of automobiles could be.