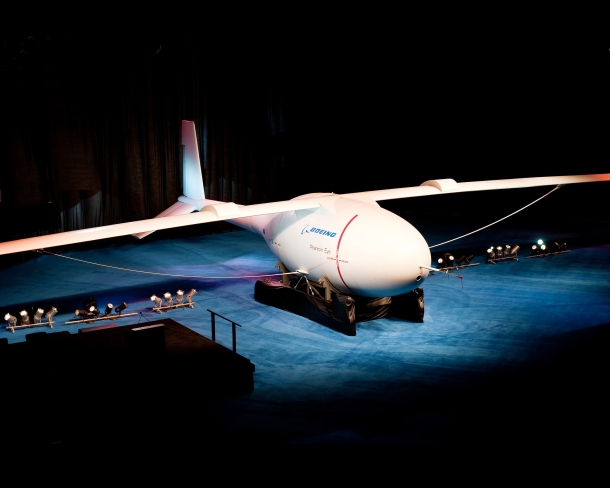 Most spy planes are built for stealth.  Boeing’s recently unveiled Phantom Eye, on the other hand, boasts impressive endurance, bringing with it the ability to fly non-stop for as long as four days.

According to the company, the aircraft’s secret lies in its lighter and more powerful hydrogen fuel system.  Ditching traditional jet fuels in favor of everyone’s second favorite water component (let’s face it, we’d rather have oxygen in a head-to-head battle) apparently offer benefits that go beyond the old eco-friendly characteristic.

The Phantom Eye is an unmanned, hydrogen-powered reconnaissance drone that can take to the skies without touching ground for a lengthy 96 hours.   Able to rise up to 65,000-ft in the air, the UAV runs on two 2.3-liter four-cylinder engines blowing 150 horsepower each.  Unlike most spy planes, however, it’s large, with a bulbous body and a massive 150-ft wingspan.

Before the hydrogen flyer, Boeing’s previous long-lasting endurance drone was the Condor, a gas-powered plane that took to the skies for up to 60 hours at a time.  Of course, the size will make flying inconspicuously difficult, apart from making it relatively easier to shoot down.

A demonstrator version of the Phantom Eye will be shipped to NASA’s Dryden Flight Research Center in California later in the summer.  The plane will take its first flight early in 2011.