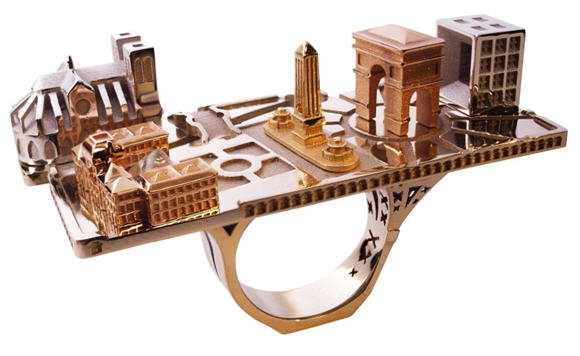 Why put a rock on your ring when you can design it with an entire neighborhood?  That’s what Philippe Tournaire has done with with his Villa de Reve rings, which sees buildings, mansions and other architectural structures adorning the finger jewelry.

They’re big and gawdy, no other way around it.  If you punch a random dude with one of these around your ring finger, you’re not going to leave them pretty.  More importantly, though, they’re exactly the kind of jewelry men can feel comfortable wearing – big, burly and couldn’t care less about it. 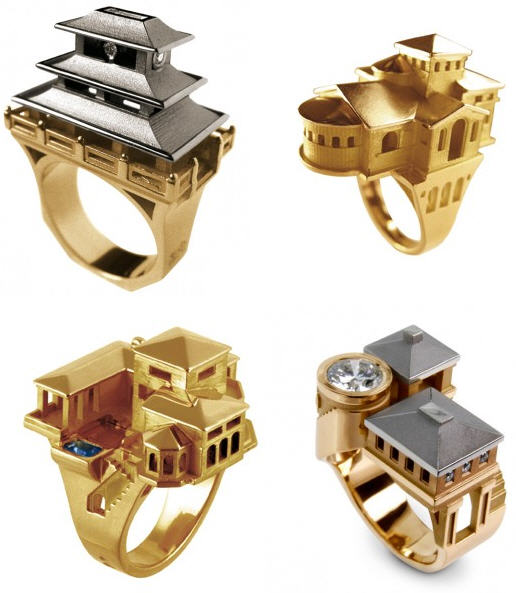 Made with 18k platinum and gold, with some designs sporting a rock, the Villa de Reve rings come fashioned with such architectural pieces as downtown Paris, a Florida villa and a New York building cluster.  Tournaire claims to use Google Earth to find images of the structures, before painstakingly fashioning them into each piece.   Yep, that big male sex organ you drew over your house’s roof for the satellite cameras to catch just might make it in one of his designs, though, I wouldn’t count on it.

I’m honestly torn.  On the one hand, they look like children’s favors, similar to those character rings you get for free at the bottom of cereal boxes.  On the other, they’re exquisitely detailed and clad in precious material, apart from the built-in face-busting capabilities they obviously bring along.

Like most custom jewelry creations, price for Philippe Tournaire’s Villa de Reve collection isn’t listed (you can just imagine what that implies).  You can contact the company if you’re interested in purchasing one of the designs, though.