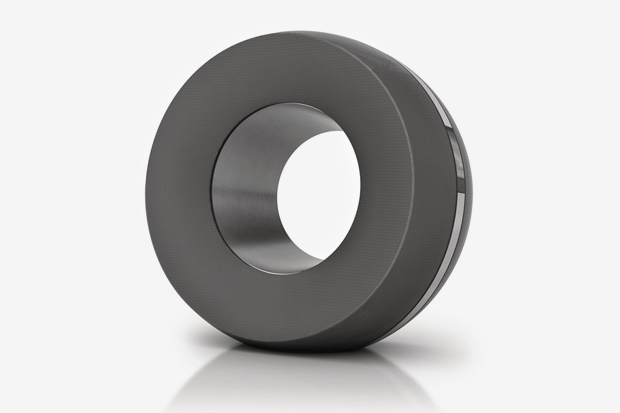 You have a full set of speakers at home.  All this time, though, all you’ve really longed for is a standalone speaker that looks like a donut.  Even a mini-donut will do.  And you couldn’t find one.  Until now, of course, with the Philips Fidelio SoundRing.

A wireless speaker, it’s compatible with Apple’s Airplay, allowing you to easily stream music from any iOS device to multiple sound outputs around the house.  To completely eliminate wires, it comes with a rechargeable battery integrated (along with a bundled charging dock) that will keep it adequately juiced for up to five hours at a time.

The Philips Fidelio SoundRing’s unusual shape should make for one unique addition to your home entertainment ensemble, whether you set it down on a table or hang it by the center from a short pole sticking out of a wall.  It’s small enough to be easily moved around the house, too, so you can skewer it into the towel rack when you need a little sound to accompany your morning shave.

According to the press release, the speaker produces a “natural and immersive sound” that’s been engineered to surround the room with your tunes.  It features a central bass sound pipe, along with four high-definition drivers — two in front and two along the sides.

If you’ve been in the market for a good-sounding portable speaker that looks like you bought it from Dunkin Donuts, it’s going to be hard to find anything that tops the Philips Fidelio SoundRing.  No word on pricing or release dates yet, however.