Pianocade Is A Perfect Synthesizer For Arcade Button Mashers

You always wanted to play with one of those DJ boxes, but could never quite get over being intimidated by all those knobs, sliders and pads.  After all, you grew up on joysticks and buttons — what the hell do you know about those kinds of controls anyway?   Well, the Pianocade might just give you a way in.

A chiptunes synthesizer in the body of an arcade control pad, it’s the music-making instrument for the rest of us.  No keyboard keys, no turntables, no sliders and no obfuscated controls: just a joystick and lots of big buttons no different from the Custom Carbon Fiber Joystick box that you use for slaying all the neighbor kids in Street Fighter x Tekken. 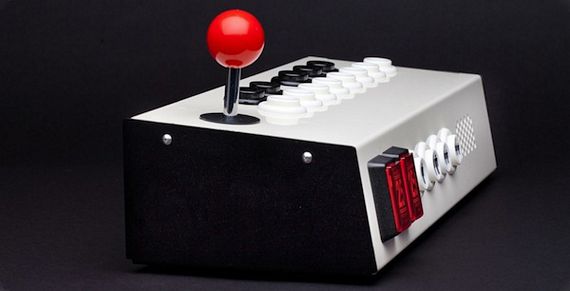 Made by Toronto-based Portmanteau Devices, the Pianocade comes in two flavors: One Octave and Two Octave.  Most of the configuration is similar for the two, except the One Octave only has 13 buttons while the Two Octave boasts 25.   While it can function as a MIDi contoller, the main purpose is to act as a self-contained monophonic synthesizer that recreates the sound hardware of the old NES and Game Boy consoles.  With a 128-note range, 15 sound banks, auto-arpeggiated chords and programmable arpeggiation, you can use it to create music similar to what used to play in the background of your favorite retro games all by its lonesome, blaring the results through a built-in 5-watt speaker.

It has both the traditional 5-pin MIDI ports and USB MIDI, allowing you to use it with every other gear in your closet.  The units are also completely open source, so you can easily modify the circuit board, download custom firmware and, pretty much, do whatever the heck you want without having to go in blind.

The Pianocade is available on preorder.  Prices (in Canadian dollars) are $250 for the One Octave; $325 for the Two Octave; and $100 for the electronics only (you make your own box).  Production is scheduled for September 14, with units shipping out two to three months after that.