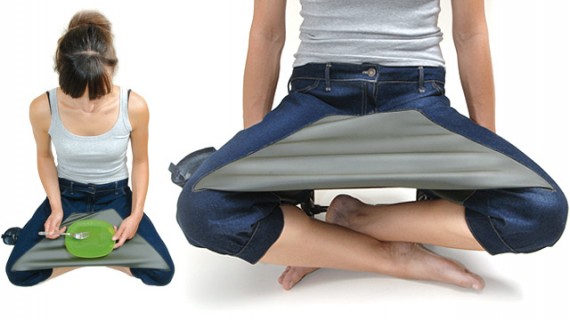 Remember MC Hammer’s pants?  As much of a fashion disaster as it was, turns out it could have been ideal for wearing at picnics.  Because that extra-generous crotch area seemed to have been the inspiration behind these Pic Nic Pants.

Designed by Aquacalda, the pants are an erstwhile regular pair of jeans that have been tricked out to function as the perfect trousers for eating while sitting cross-legged on a  low stool and on the ground.  Not that it’s necessary in a picnic (you can, you know, use that blanket you laid down on the ground), of course, but just in case you want to eat with everything within arm’s reach right on your lap. 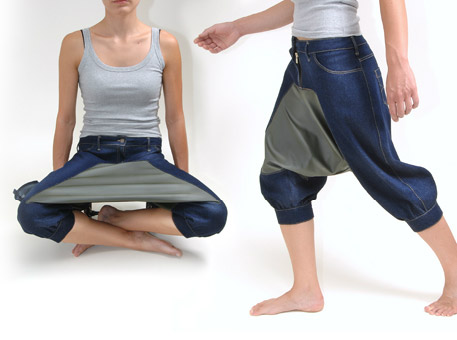 The Pic Nic Pants feature a triangular patch of fabric at the crotch and a strategically-oriented pocket along the leg.  When you sit down, the fabric stretches out to become a functional tray, while the pocket aligns vertically to serve as a cup holder (provided you’re not drinking from the World’s Largest Coffee Cup).  Neither of the two fittings impede regular movement, so you can still go about your day like normal, as if you’re wearing pants that aren’t very weird.

While it’s a cute design, it’s probably unnecessary.  Unless you frequently find yourself in situations where you need to eat on your lap.  Which I guess could be pretty common if you’re frequently on the go.

Chances are, the Pic Nic Pants will never be produced, barring a resurrection of the classic Hammer pants.  It sure is one cute design that solves a very niche problem though.