Pickmaster Plectrum Punch For Making Your Own Guitar Picks 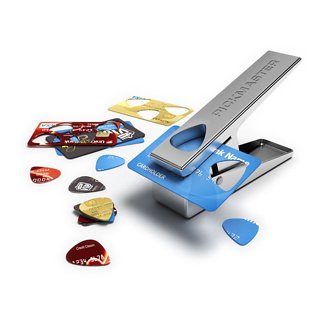 Many great guitarists of the past century have had to occasionally improvise when they have found themselves missing a plectrum.

One such incident has gone down in folklore, when Ronnie Wood forgot his plectrum and had to create one from a cereal packet so he could play the gig.

But things would have been different if he’d had the Pickmaster Plectrum Punch, as this lets the avid guitar player make a plectrum out of anything that is plastic.
The way that this ingenious gadget works is in essence the same way that a hole punch does, although the Pickmaster has a lot more power in its mechanisms. The piece of plastic is inserted in to the Pickmaster, which is then pushed down to force a plectrum shaped piece of plastic to be created – giving the user a perfect plectrum in seconds. As the Pickmaster is strong enough to punch through almost any thickness of plastic, the guitar player will be able to create a thickness that is perfect for the way that they like to play.

Some of the items that can be used to create plectrums include old credit cards, store cards, milk cartons and anything in between. In fact, the amount of different plectrums that can be made is only limited by the owner’s imagination. Furthermore, all of the plectrums made will be in the standard “351” size, which ensures that everyone will be comfortable holding them.

With plectrums costing around a dollar each to buy nowadays, just a few uses of this machine and it will have paid for itself. Some might worry about the quality being poorer than the plectrums that are bought in the shops but this isn’t true – as long as the correct type of plastic is found, the results will be just as good as shop bought plectrums.

For any guitar enthusiast, this makes a fantastic gift. It is both original yet practical and will keep them busy for hours upon end. Just make sure that all current credit cards are hidden away before they start using it!