Pik’N Board Adds A Strummable Percussion Board To Your Guitar 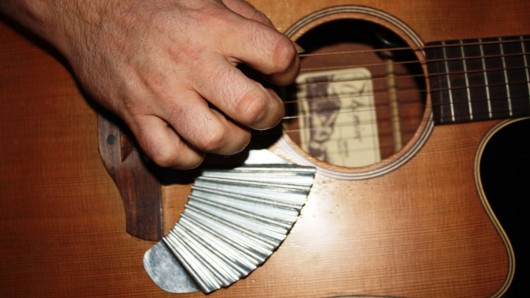 Sure, it’s not nearly as fun as having some dude tapping on a box to back you up. If you’re a solo musician looking to give your guitar stylings some semblance of a back beat, though, the Pik’N Board should be a plenty useful addition to your instrument setup.

Created by musician Steve Baker, the contraption is an add-on accessory you can stick to your guitar, right on the face just below the strings.  Designed to work with a pick, you can hit it with the same stroke you use to play the strings, adding an entirely new dimension to solo-playing without hauling any extra gear.

The Pik’N Board is a metal device with a construction that resembles a mini-washboard.  When struck with a pick, the ridged surface can deliver a percussion sound that gives added texture to your music.  According to the product website, you can use it to layer “latin maracas, cha-cha cabasa, guru beats, country off beats, solid bluegrass and rock and roll chunking” to your erstwhile single-instrument performances.

Granted, there will probably be some learning curve attached to this thing.  Given how hard serious musicians work to make their performances sound good, though, we doubt that will be an issue.  Talentless geeks trying to use a guitar to pick up hippie chicks in the neighborhood might want to stay clear, though — one less thing to fake is one solid thing in your favor.

You can buy the Pik’N Board directly from the product website, priced at $29.95.  Check out the video below to see it in action.