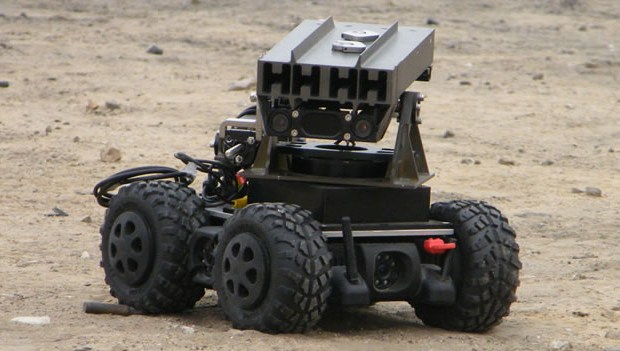 Think you can contain the robot takeover by setting traps that will blast our future overlords to pieces? Probably not with Pincher, an unmanned ground vehicle (UGV) that’s under development at the Rafael Advanced Defense Systems in Israel, which can disable improvised explosives from long distance. How? By firing mini-rockets that destroy the combustible materials without exploding them. Yikes.

Of course, a robot like this will have plenty of value to humans too (for now). No longer will the bomb squad need to send in people to disarm a threat, for instance. Just grab the remote, guide the robot to the bomb location and launch those rockets from afar. Problem solved. If any untoward incidents occur, there will be no fatalities, other than a mass of steel and electronics that you can easily recreate in the factory.

The Pincher is tiny, measuring about 7 x 7 inches total. Central component is a mini-launcher system atop a robot platform with wheels, sensors and aiming equipment. It fires 8-inch arrow-shaped pyrophoric rockets that contain a miniature motor and stabilizing fins. When fired, the arrow will store enough kinetic energy to crack the target’s outer frame, at which point it will self-ignite. The unique pyrophoric material in the projectile will combust in flames, creating a thermal effect that causes the charge to burn instead of explode.

When operational, you can theoretically attach the targeting system to any robot base, so you can equip it on a 5-foot tall Gundam and have the automaton as your bomb squad’s official mascot. Kinda gives a tingly feeling knowing you won’t have to guess whether to cut the blue or red wire anymore, doesn’t it? Just send the robot in and let it torch that whole IED.

No target dates stated in the report, so Pincher might not even make it to the scheduled robot takeover.  Which, credible sources tell me, is slated to commence in the fourth quarter of the year.  Really.