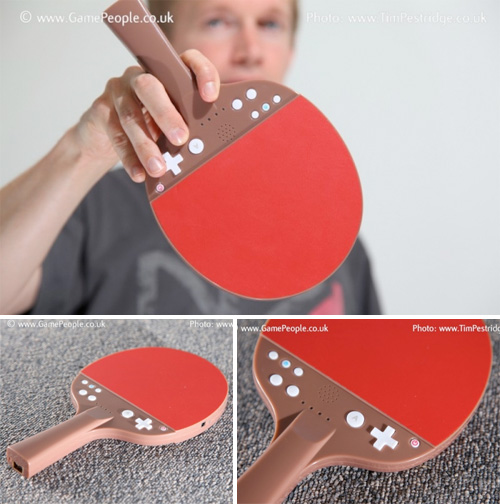 Like playing Wii Sports Table Tennis?  Then you’re probably having less fun than this guy, who managed to convince a Chinese manufacturer to send him an example of a bespoke ping pong paddle they’re still prototyping.

Instead of a plastic slab designed to fit a Wiimote, it’s a plastic slab that replaces the controller itself.  It has all the buttons and electronics, including Motion Plus, built into it.  That way, they were able to better control the shape, weight and other factors that went into the paddle, allowing them to fashion it in a more realistic design.

The dude in the pic is Paul Govan, showing off his newly-acquired table tennis bat accessory.  As you can see, it’s nothing like the ugly pseudo-paddles that usually pass off for Wii players, mimicking the shape and dimensions of a real one.

According to Paul, the gaming peripheral added a new “sense of connection” to the game, with the toy paddle having the same feel and weight distribution as one you will use in a real-life competition.  There’s absolutely nothing we can find about the device on the web, so this is probably still some ways off from getting on shelves.  If the prototype is as good as Paul says, though, we’ll likely begin seeing one before the holiday season.