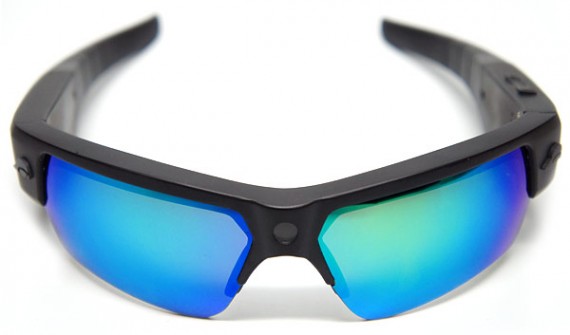 While it’s not the first video-recording eyewear we’ve seen, Pivothead’s products sure looks like they’re going to make a mark in the category.  Dressed in aggressive styling and decked with powerful motion capture hardware, GoPro could have a serious competitor in its midst.

Unlike GoPro, however, Pivothead deals exclusively with sports glasses packing built-in action shooters.  The camera lens sit  noticeably on the bridge connecting the glare-fending mask lenses on either side (your choice of Polarized, Revo or Polychromic), with controls scattered around the frame and the temples.

Pivothead’s product line consists of four models, Aurora, Durango, Moab and Recon, each one sporting a distinct exterior appearance.  Designed for point of view recording during action sports, the frames are all lightweight and impact-resistant, so the glasses never get in the way, whether you’re biking down a trail, climbing up a cliff or base jumping off a tree to a swamp filled with crocodiles.  Yes, you’ll probably end up with a limb bit off doing that, but the glasses won’t ever get in the way.

It can capture full 1080p video using the installed camera module, which features an 8.0 megapixel Sony sensor, a four-element glass lens, gyroscope-based image stabilization and continuous auto-focus.  The sensor is mounted at a 90-degree angle, so it records exactly what you’re staring at (unless you’re doing that sneaky peripheral vision thing, of course).   Onboard storage is 8GB, with a 440mAh battery providing the juice (good for an estimated 1 hour of shooting time).

All four Pivothead models will hit the streets in April, priced at $349.