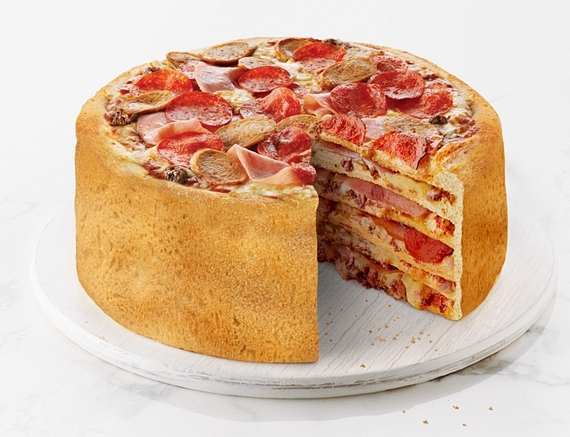 No the Pizza Cake isn’t a cake that’s been decorated to look like a pizza. That would have just been disappointing. Instead, it’s a pie styled to look like a cake with nothing but layer upon layer of greasy, cheesy, and delicious pizza slices. And it’s awesome.

A potential addition to Boston Pizza’s summer menu (for their Canadian outlets only), the Pizza Cake actually appears to be a cake-sized stuffed pizza of sorts. Basically, they stacked half-a-dozen complete pizzas on top of each other and closed off the sides so it looks like one giant bundle of food. It’s inarguably insane. And probably very delicious. I have no idea how to eat it (much less slice it — I reckon my Axe Pizza Cutter won’t work), but I’m already imagining a mess that’s equally confusing and appetizing at the same time.

Like we said, it’s only a “potential” addition for now. Boston Pizza is actually holding a poll for people to vote on several options — the one that receives the biggest support gets the honor of being inducted into the summer menu. As of the moment, Pizza Cake is leading by a wide margin, with entries like pizzaburger sliders (mini burgers wrapped in mini pizzas), pizza taco (chipotle and chicken taco with a pizza shell), and pizza-flavoured mints trailing behind it.

Since I don’t live in Canada, I’ll just wait for the first local joint that decides to steal this monstrosity. We all know it’s going to happen. I mean, how can you deny the rest of the world its Pizza Cake?