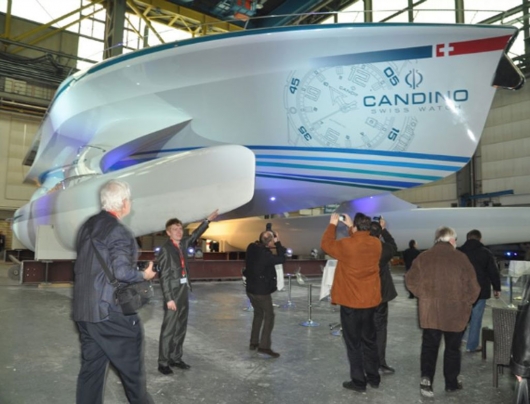 Since the 1980s, skipper Raphael Domjan has been dreaming of sailing around the world using the minimum amount of energy.  Five years ago, he embarked on a journey to fulfill that dream.  Recently, they unveiled the vessel that will help him accomplish it – PlanetSolar, the world’s largest solar-powered boat.

Shown off at the HDW shipyard in Kiel, Germany, the catamaran measures 100 feet long, 50 feet wide and 25 feet high.  Using a multi-hull body constructed by the Knierim Yacht Club, they’ve been able to incorporate a massive photovoltaic array of solar panels that cover a monstrous area of 5,300 square feet, employing a total 38,000 units of SunPower’s 22% efficiency, next-generation cells. 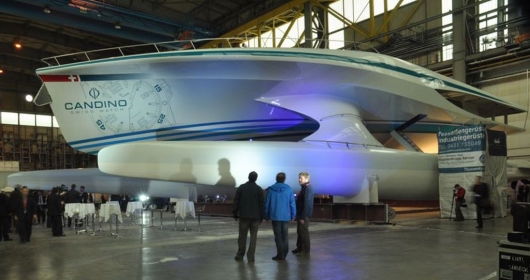 PlanetSolar will depend solely on the solar generators for its power the whole time it stays on the water, predicting an average engine consumption of 20kW.  Weighing 61 tons, it can travel at a top speed of 14 knots (about 17 mph), with an expected average speed of 8 knots when Domjan takes it to navigate the globe.  The boat is designed to handle two crews and up to 200 people onboard. 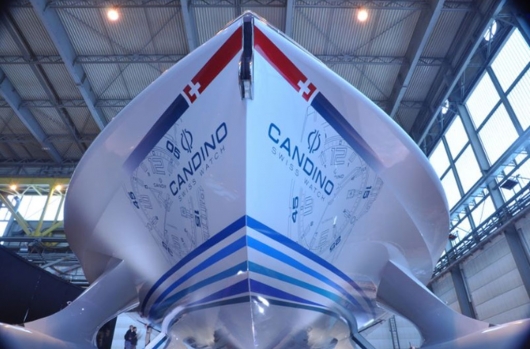 While the craft has been built, it’s still a short distance away from actually beginning its world journey.  Real world trials is slated to commence this month, with a European tour planned for May.  The global voyage will begin early in 2011, where it will make stops in major international cities, including Hamburg, London, New York, Singapore and Abu Dhabi.

According to PlanetSolar, the project cost them around $24 million.