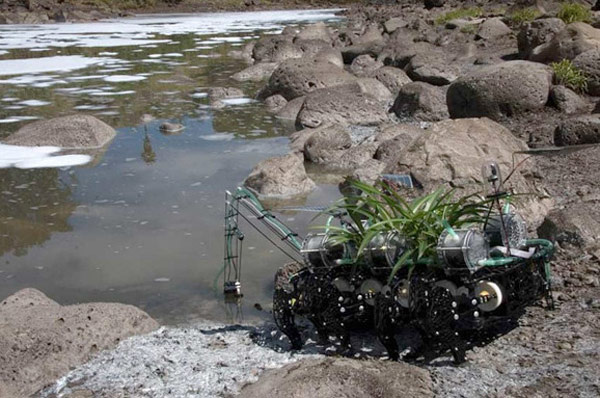 We all know what kind of species will inhabit the Earth in our robot overlord future: half conventional life form and half automaton mashups. Yes, just like these Plantas Nomadas (Nomadic Plant), a veritable Roboplant that feeds on polluted water while housing a parasitic plant on its back.

Created by Mexican artist Gilberto Esparza, the autonomous machine is a working art project that essentially creates an entirely new species. Not only can it trek to your favorite polluted river on its own, it will drink from it to replenish its power, all while supplying by-products that the piggybacking plant will use for nutrients. A self-powering gardener robot, if you must. Scary and noble at the same time. 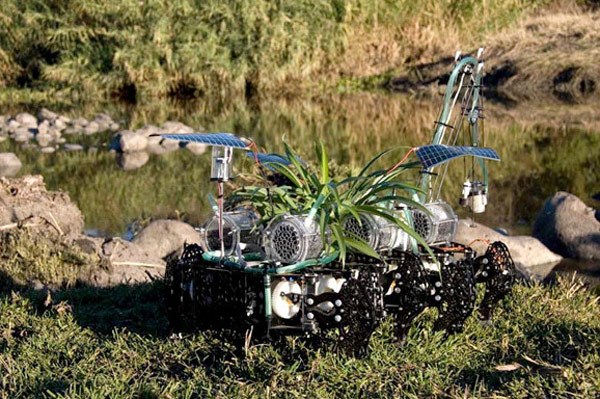 The Plantas Nomadas houses a microbial fuel cell (MFC), which it uses to supply the power it needs to stay in motion. It uses a hose-like mechanism to siphon gross liquids from your friendly, neighborhood dirty water source, whose elements are then decomposed and turned into energy by the microbial fuel cells. The whole thing looks like a fashionista robot otherwise, with multiple spider-like legs and a living plant adorning it from the top.

We’re not sure if this is a real functioning MFC-based robot. As far as I know, that power source is still in the research stages. Most likely, this is an art concept – one that could theoretically be very feasible once the science on MFC gets more advanced. Can you imagine a future of robots raising healthy shrubs while drinking from sewer water? Could be possible.

Esparaza’s current installation for Plantas Nomadas features the robot, along with a video of its creation, a documentary showing it in action (at the river Santiago in Jalisco, Mexico) and a series of photos. It is on display at the Laboral Centro de Arte in Spain until June 7, 2010.

[Laboral via We Make Money Not Art]