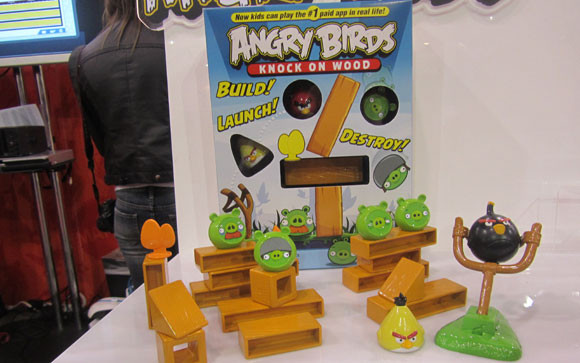 Want to take some time off from staring at rectangular LED-backlit screens, but can’t stand not having your fill of Angry Birds?  Not a problem soon with Angry Birds Knock on Wood, which brings the popular mobile game out of your smartphone and into the coffee table.

Created by Mattel, the game lets you build porcine fortresses using plastic blocks of various shapes.  You get pigs to set on top of the blocks, of course, along with projectile birds that you can send soaring up the air using a catapult.  Unlike the video game, the birds don’t get special qualities as ammunition, although they do feature some variety in appearance. 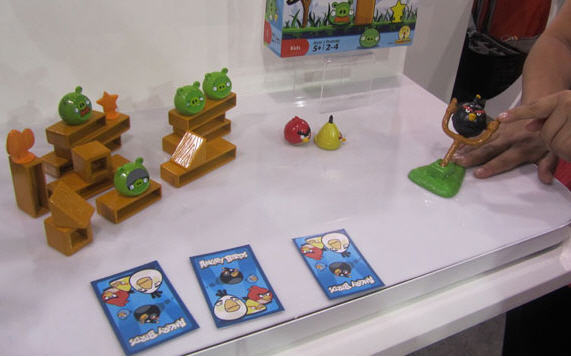 Angry Birds Knock on Wood comes with 14 bricks of different shapes, four pigs, three birds (red, yellow and black), a few extra figures and a card deck.  Designed for up to four players, you can play as one of the birds or the dude in charge of the pigs.  Gameplay involves pulling a card from the deck, doing the missions and scoring each move — first to get to 1,000 points win. 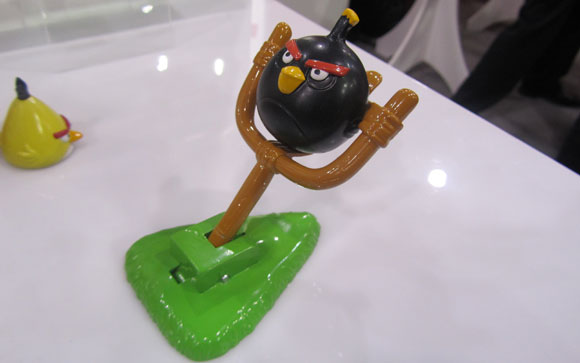 It’s easy to see how they can expand on the game to sell even more add-on toys.  Right off the bat, I know folks would want more blocks and more of those cute birds to hurl across equally adorable swines.  A card-based game is also reportedly in the works, along with more versions if this thing goes big (which it likely will).

Slated for a May release, Angry Birds Knock on Wood will retail for $14.99.