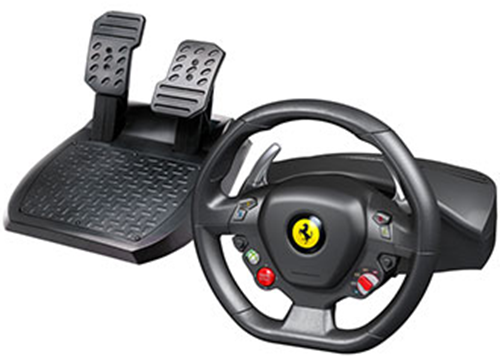 Granted, the Thrustmaster Ferrari 458 Italia Racing Wheel doesn’t look half as awesome as the official 150 Italia Replica they’re selling over at the Ferrari website.  Unlike that display piece, though, this one’s perfectly playable, so can rock out Ferrari-style while getting your Forza jollies.

Created for the Xbox 360, the gaming controller is based on the racing wheel of the the F458 Italia from Forza Motorsport 4, the hero vehicle featured in the game.  That way, you can add more realism to your gaming rig to make up for the fact that your driving skills still suck.

The Thrustmaster Ferrari 458 Italia Racing Wheel measures 11 inches in diameter, with the frame covered in rubber-textured grip for comfortable handling.  Metal gear shifters are built right into the wheel, along with a Manettino dial for quickly modifying multiple in-game settings.  For even more immersive racing, you can adjust the automatic centering system under the bonnet to provide progressive resistance.

It features all the standard Xbox 360 controls — D-pad, eight action buttons and the Xbox control button.  There’s also a connector for the headset and mic.  The included pedal base features a wide footrest, a long-stroke accelerator pedal and a resistance-optimized brake pedal.

Despite the official Ferrari license, the Ferrari 458 Italia Racing Wheel for Xbox 360 will retail for an affordable-sounding $89.99.  It hits stores in October.