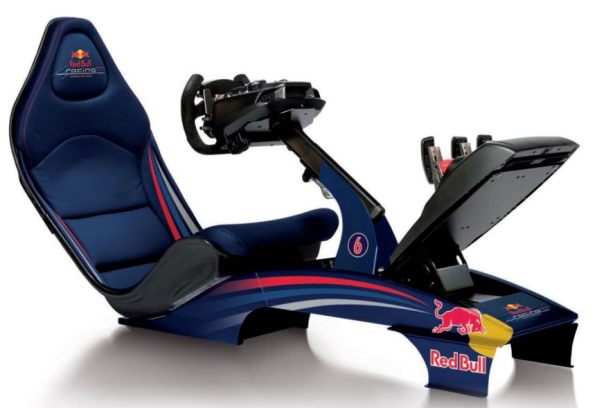 Racing simulators attempting to mimic the F1 experience isn’t new.  This Playseat F1 Simulator, however, goes a step further, dressing itself up in official Red Bull Racing livery and forcing you into a physically awkward racing stance.

Unlike most arcade racing setups, it’s specifically designed to resemble the driving position inside a real Formula One car.  That means, the profile is ultra-low, with the seat angled back and the pedals elevated, making you take the same posture McLaren, Schumacher and company regularly put themselves in during all those hours on the tracks.

The Playseat F1 Simulator is a racing seat that measures 55.1 x 19.7 x 34.6 inches.  An adjustable steel framework holds up the bucket, which comes with vinyl upholstery and double-stitching accents.   Weighing just a tad over 50 lbs., you should be able to move it around the house, too, provided you have some decent muscles hiding beneath all that “baby fat.”

Instead of integrating various electronic and mechanical parts the way other simulators do, it’s actually just a stationary piece of gaming chair — albeit, one that allows you to drive virtually as if you’re piloting an actual F1 racer.  You get a tray to prop up a steering wheel on and a stand for the pedals, as well as provisions for a Logitech G27 gearshift if you want one.  Since it’s just a furniture, you can hook it up to practically any gaming console and racing controllers available on the market, as well.

According to the official website, the Playseat F1 Simulator will ship beginning May.  It’s available both with or without the Red Bull Racing motif, as well as with bundled optional controllers from either Logitech or Arc.