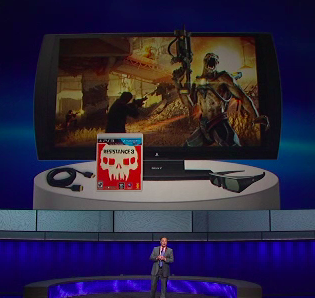 Sony just introduced what looks like a giant PSP.  Fortunately, it’s not a giant PSP, but a new 3DTV they’re dubbing as the Playstation TV.

Intended for PS3 gaming, it uses a neat trick that changes the way two-player gaming is done on a single TV.  Rather than opting for a split screen, it feeds two different sets of 1080p images to the two players in the same room (each with his own 3D glasses, of course), putting an end to the longstanding problem of peeking at what the other dude is up to.  Actually, you still can — there’s a button on top of the glasses that allow you to switch feeds, but it’s a little harder now than it used to be.

Sony has obviously learned from the lessons of the PS3 when it first came out: you can’t price yourself out of competition. Instead, they’re positioning the Playstation TV as an affordable 3DTV option.  At $499, it really just might be.

Of course, there’s caveats to be had.  The screen, for one, is only 24 inches, which could prove too small for many living rooms where 3DTVs currently reside.  For bedrooms and dorm rooms where a lot of gamers will be getting their console fix, however, the smaller display could end up just right.

Beyond gaming, the Playstation TV should offer up similar technologies as current 3DTVs, with support for 3D movies and such (provided you wear dorky glasses).   The $499 retail price will net you the 3DTV, an HDMI cable, one pair of glasses and a copy of Resistance 3.  Extra stereoscopic specs will go for $69