Playstation VR Aim Controller: So, This Is How We’ll Play FPS When PS VR Comes Out 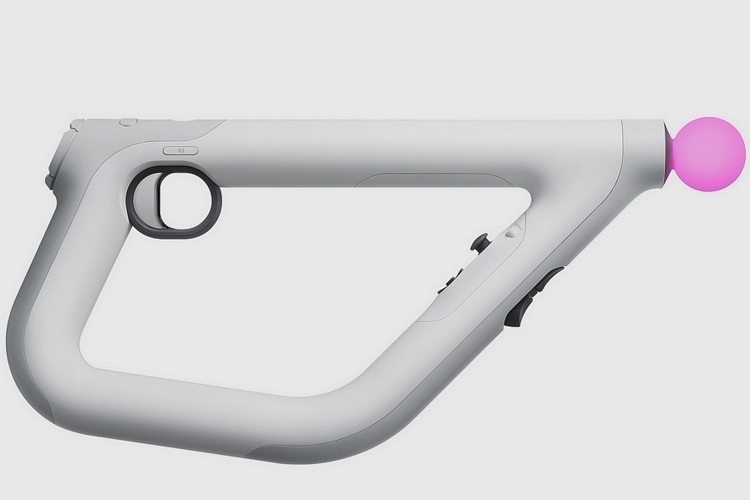 The great thing about VR is your vision is limited to the virtual world you’re playing in. As such, you can’t see yourself fiddling with goofy-looking gamepads while working your way around the made-up world. We have a feeling that will be crucial with the Playstation VR Aim Controller, Sony’s version of a shooting rifle for their upcoming VR headgear.

Why? Because you’ll probably laugh yourself silly playing a serious historical FPS while wielding a gun that looks like a seven-year old’s toy. I mean, come on, it even comes with a pink clown nose on the nozzle. We know, Sony’s other motion controllers got those, too, but it’s especially goofy to look at when you’re trying to feel like a badass that’s shooting your way out of a burning battlefield.

While it looks goofy, the Playstation VR Aim Controller certainly won’t work goofy. In fact, Sony claims it offers the most realistic and precise way to control a rifle in their VR platform. At least, that’s as far as the upcoming Farpoint game is concerned, where they claim to foster direct 1 to 1 tracking, so your virtual weapon is always aimed at the exact same place as the plastic rifle. The game’s developer Impulse Gear, in fact, claim the rifle controller “allows you to do things in Farpoint that just are not possible in a standard FPS game.” Whatever those things are, of course, we probably wouldn’t know until both come out.

Check out a trailer for Farpoint where, we’re guessing, they’re using a Playstation VR Aim Controller below.