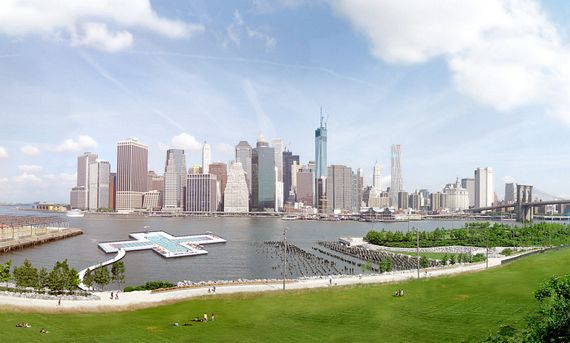 I’ve always thought Kickstarter is the best place to raise funding for ridiculously ambitious and off-the-wall ideas, which is why it’s a little disappointing to see so few of it and so many of erstwhile humdrum projects.  The New York-based +Pool  (pronounced as PlusPool) definitely embraces the crazy, though, with its grand plan of putting up a public swimming pool that floats on the river, so you can swim “in the river” without actually coming in contact with dirty river water.

Dreamed up by designers from NYC firms Family and PlayLab, the pool will be installed in the East River between Brooklyn and Manhattan.  And if that’s not awesome enough, they’re making it a portable facility, so they can move the entire thing to the Hudson between New York and New Jersey.  Heck, they may even park it off Ellis Island at some point, so this can be a pretty big deal. 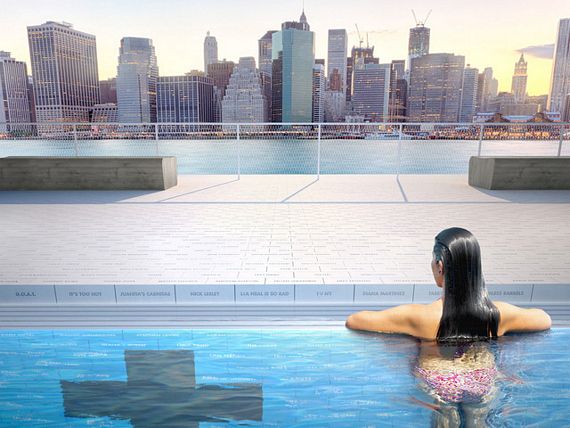 The +Pool project will use actual river water to fill up the pool, which sounds a little gross.  Don’t worry, though — the pool’s walls will have a built-in layered filtration system that’s going to incrementally remove bacteria and contaminants to ensure you’re actually swimming in clean water.  The pool water will use no chemicals and no additives, either, so you’re, technically, really swimming in the river.  According to the group, the pool should be able to clean up to half a million gallons of river water every single day it stays up, so it can also help lessen the water body’s contamination. 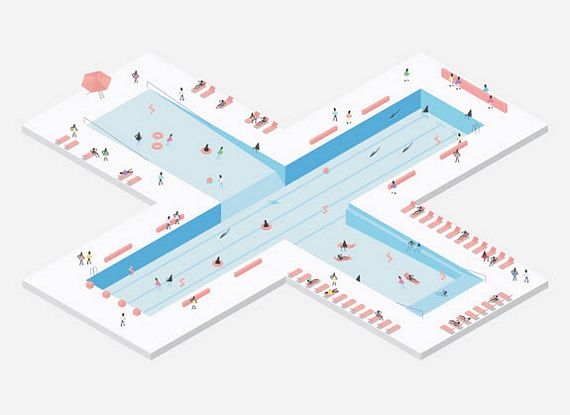 The actual facility will be cross-shaped with a large deck area, which makes it easy to separate it into four sections: a kid’s pool, a lap pool, a lounge pool and a sports pool.  They can be operated individually or combined when needed to build a large pool for competitive events or special occasions.   The pool part measures 164 x 164 x 5 feet (l x w x d), with arms measuring 32 feet wide (four lanes).  With the deck included, the entire thing spans 205 x 205 x 8 feet.

Currently, +Pool is still raising funding on Kickstarter.  They offer different levels of pledges starting at $25 with different rewards, including having your name/business name engraved on pool tiles and admission passes for the facility.