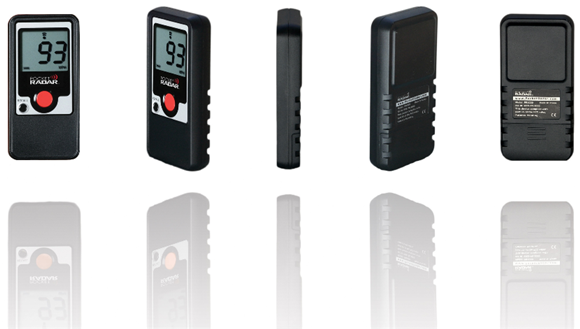 Ever been curious how fast things go?  Clock the speed of everything that flies before you with the Pocket Radar, a Doppler radar that happily ditches the traditional gun shape for a cellphone-sized frame.

Named as one of 2010’s top new consumer technologies at the CES New York Press Preview, the ultra-portable gadget can register the real-time speed of any moving object via simple point-and-click.  Simply aim it in my direction while I streak naked down the street, push the big red button and find out just how fast my bum is passing you by.

The Pocket Radar boasts the same degree of accuracy as traditional radar guns, able to clock the speed of passing objects to within one mph.  That’s pretty impressive, considering it manages the deed while being able to fit in your shirt’s front pocket.  Powered by a pair of AAA batteries, you can use it  to record the speed of your pet cockroach up to 10,000 times.

Why would you want one?  I have no idea.  Maybe you enjoy measuring how fast you can throw a curve ball.  Perhaps, you like to stand on street corners, collecting speed information on passing cars.  Ever spent a boring afternoon measuring the average stride of the rats in your basement?  Uhhh…I have.

The manufacturer is positioning the Pocket Radar as an instrument for athletic programs and racing fans, apart from the obvious law enforcement functionality.  More likely than not, this will find itself in a number of modding projects where its speed-clocking talents and portable form can be put to good use.  There’s no pricing yet, but expect to find it at the CES trade show in January.