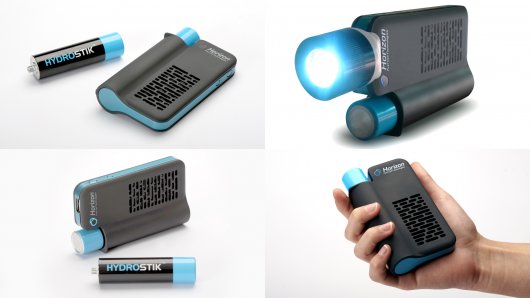 Originally introduced at CES many years ago, the Horizon Minipak was looking more and more like vaporware as time went by.  Turns out it isn’t and you can buy one now.

Yes, the pocket-sized fuel cell is out and ready to charge your gadgets on the go.  At $99, it’s a heck of a value too, proving much cheaper than carrying the equivalent charge in the form of batteries or other charging platforms.

The Horizon Minipak, which is essentially a mini-scale power plant, consists of two components: the actual charger, which fits in the palm of your hand, and a “solid state” hydrogen cartridge.  You slide the cylindrical refill in and let the fuel cell charger do its trick, converting the hydrogen to usable energy for USB-plugged devices.  All the conversion is done right in the point of use, so there’s no work needed on your part until you’re actually charging stuff up.

Delivering between 1.5 to 2.5W of continuous power, it can charge cellphones, handheld gaming consoles, MP3 players and other small gadgets requiring 3W of power and below.  According to Horizon, each cartridge can provide energy equivalent to 1,000 disposable AA batteries.  You can compute the potential savings yourself – it sounds quite hefty.

While not the first  of its kind, it’s certainly cheaper than the other alternative (Toshiba has a Japan-only unit on sale).   Provided the actual fuel cell doesn’t conk out after a couple of months, it also sounds like the most cost-effective on-the-go charging solution right now.

You can get the Horizon Minipak, which comes with two free cartridges, directly from the company website.  Refill cartridges are available in packs of six, but are not yet priced.