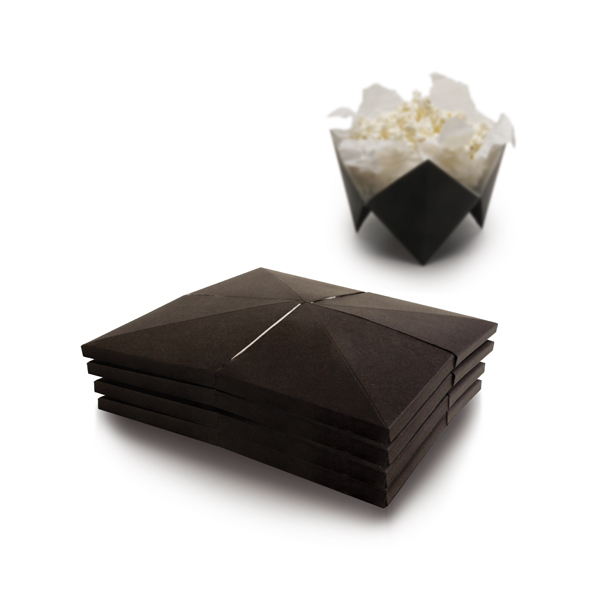 Love microwave popcorn, but hate the bag?  You’re not alone.  Designer Anni Nykänen of Packlab at the Lahti Institute of Design in Finland apparently shares your sorrow and has designed what will probably be the future of microwave popcorn – a slick container that folds down to fit into your fast-heating oven, then pops-up to become a bowl once the contents are ready to eat.

That’s right, the Pop-Up Popcorn Bowl sports two functions in one, affording you a small package to hold the kernels in and a four-legged bowl you can stand on the nearby table.  Instead of having to move all that buttery, salty snack onto a separate serving dish for consumption, you simply keep it in the exact same place.

Currently a concept, don’t you think it’s a better, more convenient replacement for those fugly popcorn bags?  Even if we never see it branded with Pop Weaver and Jolly Time,  it can be sold on its own as a hip alternative to those discouraged by the health concerns related to microwave popcorn pouches  (i.e. the bags’ PFOA content, which has been found to be a carcinogenic among lab animals).

I think the Pop-Up Popcorn Container is the future of popcorn.  Just throw the kernels in, add a little oil and get your popcorns exploding inside its stylish frame.  If not, it at least looks like good paper Origami.