You Invented A What? The Pork Detection Kit 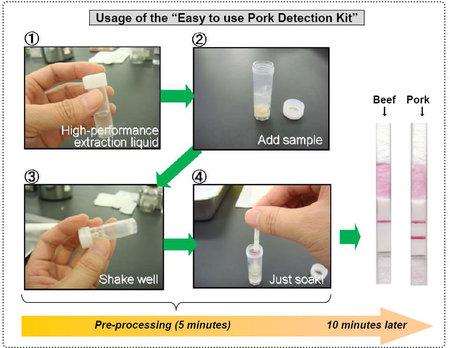 Don’t worry, The Pork Detection Kit isn’t intended to remind you that you’re as fat as a boar. What it will actually do is detect whether there are traces of pork in any raw or cooked substance you subject to it. That means we can finally find out whether any of the Halal-friendly food items in the grocery are simply pulling one over on our Muslim friends.

Pork is beautiful. We love pork. Heck, I’d swim in porkchops swimming in gravy everyday if I could. For the quarter of the world’s population who practice Islam, however, feasting on it is as disagreeable as it gets. While pork should be easy enough to recognize on regular dishes, identifying it does get a little confusing once the items are processed. How do you know there’s really no pork on those all-beef-labeled hotdogs? Other than an endorsement from a food regulatory agency, you really don’t.

Enter Tanaka Kikinzoku Kogyo, a leading Japanese precious metals trader, who, for some reason, chanced upon a way to detect the presence of of pig’s meat in food items. They’re calling it the Pork Detection Kit and it is reportedly so sensitive that even accidental, minuscule-level contamination of pork meat can be detected. According to the official company statement, the system uses colloidal gold nanoparticles suspended in liquid that enables personnel to see results in only 15 minutes.

But…but…I love pork?  I know. So get your hands on this kit and check if what you’re putting in your mouth really has pork. For all we know, all that canned meatloaf you bought from the supermarket could be processed vegi-meat. That’s a class-action lawsuit right there. Bleed those corporations that took yer pig!

The Pork Detection Kit is currently on exhibit at the Japan Meat Industry Fair, where the company is giving demonstrations of its use. According to the company, they’re aiming to move 30,000 of the things per month in the first year, with a projected increase to around 100,000 once they’ve closed targeted partnership deals.