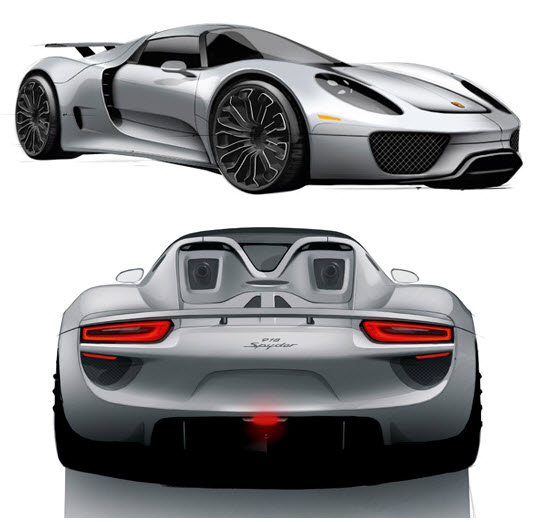 The 2010 Geneva Motor Show played host to one of the hottest hybrid car concepts we’ve seen (we even wrote about that hybrid supercar last year).  After letting all the adulation it’s received stew for an entire year, the plugin hybrid Porsche 918 Spyder will now inch closer towards production, with preorders being taken by dealers around the world.

Only a total 918 examples of the vehicle will be made, which should spur die-hard collectors to pick up that phone as early as possible (lest lose out on an opportunity).  The latest renders look decidedly swank, too — very fitting form for a supercar, regardless of drivetrain.
The Porsche 918 Spyder will get a mid-mounted 500-hp V8 engine, assisted by two electric motors (one at the front and one at the rear) that add another 218-hp to the total.   It will feature a variable all-wheel drive system, with independent control of drive forces on both axles, and a liquid-cooled lithium-ion battery providing juice to the dual motors (it should do 16 miles on electricity alone).   Estimated top track speed is 199 mph (94 mph on pure electric mode), with a 0 to 60 of 3.1 seconds.

Expected combined fuel consumption is being pegged at 3.0 L/100 km., although the company will only confirm final figures before the units ship.  While we doubt it will beat any of your favorite hybrids when it comes to fuel economy, that probably isn’t the foremost consideration for getting a supercar like this, either.