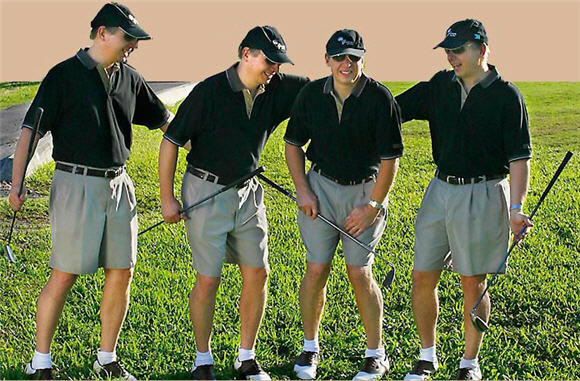 We can’t decide whether the UroClub is cool or retarded.  We’ll let you be the judge of that.  One thing I do know for sure: it’s one bundle of clever, paired up with a heaping of gross.

If you hit the greens often and have a hyperactive bladder, you’ve probably encountered a very frequent problem – realizing you need to pee while right in the middle of a game.  Sure, you can control it for a shot, maybe two.  The more you hold it back, though, the worse your swing probably gets, eventually prolonging your suffering.

The UroClub seeks to remedy that problem by offering a sneaky way to relieve yourself without leaving your spot.  That’s right, it’s a fake club that integrates a urinal right on the grip.  Simply ask a friend to stand in front of you (or use the included privacy shield – a towel), pull down your zipper, open the screw-top lid and sneak one out.  Aaaaah…sweet relief.

Designed to sit right in your golf bag, the portable john is clad in the form of a seven iron with a triple-sealed (thank God) hollow grip.  It wasn’t intended to be used for actual play, so don’t bother trying (and risking an unsavory accident).  According to its creator (a board-certified urologist from Florida), the container can take over half a liter of liquid, enough to get you through at least two sessions (maybe more, if you only eke out a trickle).

What happens if you drank a little too much soda and need to squeeze more out?  We suggest just hitting the nearest bathroom.  If you’re so inclined, you can probably carry three of the $24.95 UroClubs too.  Of course, you’ll look very suspicious with four seven irons in tow, but that’s how you roll.  Check out the very funny commercial below (note: price is still more expensive on the advertisement – it’s much cheaper now).