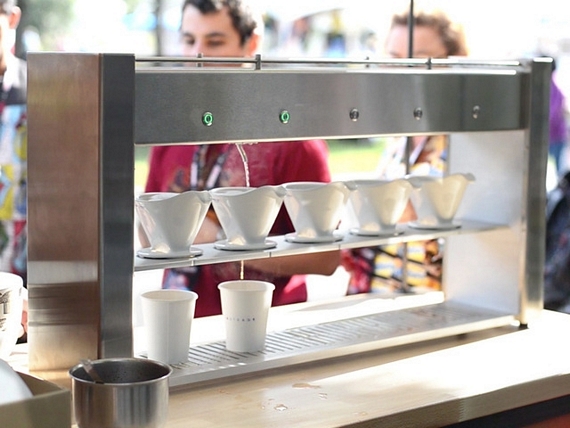 Pour-over brewing, where the liquid surrounding the coffee grounds gets continually replenished, has seen a big surge in popularity, among both coffee shop baristas and home enthusiasts, alike.  While the method makes for some great-tasting coffee, it’s one that requires a steady hand and meticulous timing – things that robots tend to be better at than puny, fallible humans.  That’s why the Poursteady will likely make for a more effective pour-over brewing contraption.

Designed for coffee shops, the machine handles all the tedious tasks associated with pour-over brewing.  That way, the right amount of water gets dripped at exactly the right moment, ensuring it produces the perfect brew every single time. 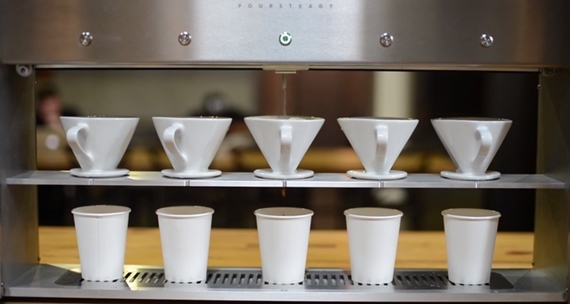 Able to brew five cups of coffee at once, the Poursteady operates using two motors on two different axes – one that moves the spout horizontally across the five filters and a tilting axis that moves the nozzle forward and backward, a combination that creates a spiral pour technique.  Water is automatically drawn up from a heater that’s designed to be concealed under the counter, although the barista will still need to load the individual filters with coffee grounds.

To use Poursteady, simply press a button, which will trigger the device to rinse the filter, heat the cone, and warm the cups at the bottom.  The barista will be prompted to load the coffee grounds once those preparatory steps are done, at which point, the machine will take over the rest of the way.  A smartphone app lets the barista control the different parameters of the brewing process, including the amount of water to use and length of time to execute the brew, with real-time updates on the progress for each batch. 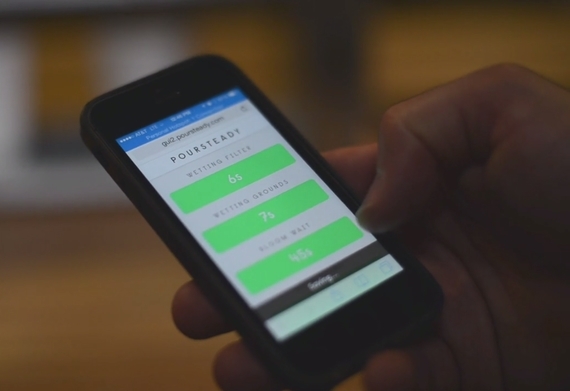 A Kickstarter campaign is currently running to fund Poursteady.  Pledges to reserve a working machine is set at $10,000.