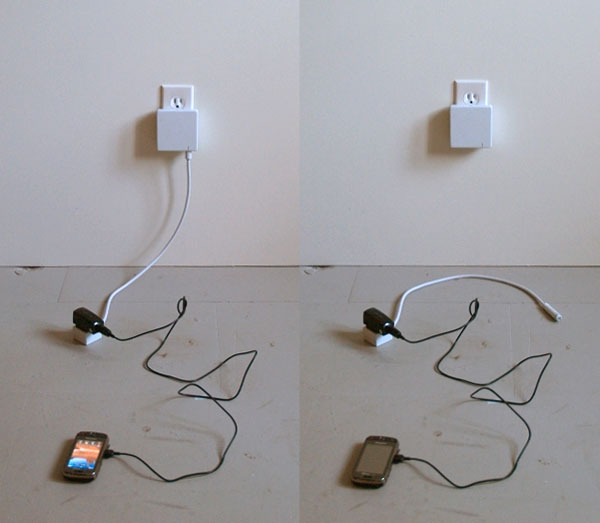 You probably know by now that chargers continue to use up power even after your gadget’s 100% full.  Heck, it continues to sip power as long as you keep it plugged in, even after you’ve removed it from the battery port.  The Outlet Regulator, also called the “Leech Plug,” is an adapter that solves this problem by detecting when the gadget’s battery is full, then physically disconnecting it from the outlet.

The system consists of two-parts: an adapter that plugs into your wall outlet and an extension that inserts into it  Detecting that you’ve topped up the battery will be the former’s job, at which point it will eject the extension cable where your actual charger is connected.  The result: no wasted electricity.

Designed by RISD student Conor Klein, the Outlet Regulator is just a design concept (there’s a video on the site, though I’m not sure it’s an actual prototype).  It’s not clear how it detects a full charge, in fact, although Conor says it’s a combination of a timer circuit and an electromechanics setup.

Power-saving chargers aren’t new, but they come few and far between compared to how many gadgets end up on our store shelves.  That’s why an adapter actually makes perfect sense – just put this in one wall outlet and use it for all your rechargeable electronics.

We’re not sure what the plans for the Outlet Regulator is, but a power-saving adapter like this should have a ready market waiting.  It’s a great idea that performs a very useful service.

[Conor Klein via No Smarties]