Power USB Lets You Control Electrical Outlets From Your PC 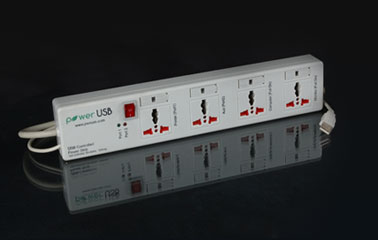 The Power USB isn’t exactly super clever like some power strips we’ve seen.  But paired with the right person, it could be very, very useful.

For the most part, the upcoming product is just like any regular extension outlet.  It’s got four universal outlets (so every plug you have can use it), a six-foot long cord  and power switch right on the body.  Size is similar to regular strips too – just slightly bigger.

So what makes it different?  Aside from the regular power cord, it comes with another six-foot cable holding a USB connector on the end.  No, the strip won’t draw power from your computer.  Instead, it lets you interface with two of the outlets on the strip from an application on your PC.

The functions aren’t anything fancy.  Just the ability to turn the two outlets on or off at the press of a button (without having to get up and reach under the table), via a timer or during an event (e.g. turn the printer’s outlet on only when you print something).  It could be useful if you have electronics you want plugged in only at certain times (like speakers, when you’re not using your headphones, or the printer example above), but don’t care about pulling and putting the plug back in throughout the day.

We’re not entirely sure how much power you can save while working this way, but we’ll guess it depends entirely on your personal work processes.  Personally, I probably won’t find the Power USB useful, but I can imagine some of my friends will.  Hopefully, the price won’t sound too retarded when they announce it.  Pre-orders start this coming August.