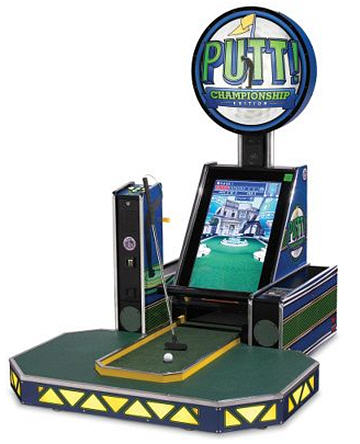 If you’re ready to throw a bunch of cash on your golf game, you might as well go the whole nine yards.  Why settle for a mini-putting course, when you can drop coin for a full arcade machine?  The Putt Championship is a miniature version of the same full-size rig you can find in large arcade halls, configured specially for personal use.

Up to four players can join in a game, which makes it the perfect way to conduct a small meeting inside your office.  Discuss the quarter’s numbers and the fiscal year’s goals, all while working to swing that ball into the hole.

The 470-lb arcade rig consists of a putting area on a raised platform, attached to a large 32-inch LCD and three speakers.  You use a real putter and an actual golf ball to interact with the onboard computer, which comes equipped with two virtual courses.  The game reacts based on how you hit the ball into the control area at the bottom of the screen, jumping through obstacles and behaving based on the configuration of the course.

Sure, it’s not half as fun as a real 18-hole tournament with Tiger Woods prancing around the screen like you can play on the Wii.  However, you’re using real putters hitting real balls, which makes it more likely to improve your game than a year swinging a Wiimote ever will.

The Putt Championship ships with its own putter (although you can use your own favorite) and five balls.  Just have the rig plopped down on the floor, plug it into a mains outlet and you’re good to go.  That is, if you can afford the $6,900 asking price.