Precision Urban Hopper Robot Jumps Over Walls, Your Home Is No Longer Safe 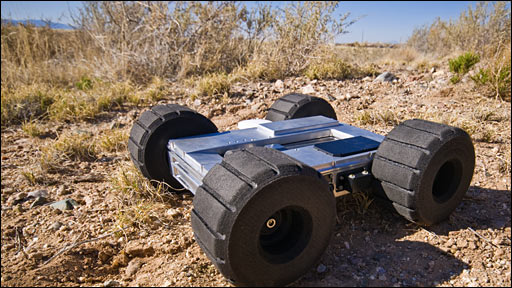 Time to raise your fences, boys.  A new robot from Boston Dynamics, harbinger of the apocalypse, can now clear vertical obstacles close to 50 times its size in a single bound.  Called the Precision Urban Hopper, it should easily go over your electrified fences 25 feet and under to kill every human in the house.

Developed under funding from Darpa, the leapfrogging robot can drive across normal surfaces like ordinary rovers.  Encountering tall obstacles, however, doesn’t deter it from its path.  Instead of looking for a way around, it just catapults itself into the air, landing on the other side.  Your robot-proof fence just may not be so safe anymore.

The Precision Urban Hopper is barely larger than a shoebox, yet can scale two Yao Mings, one standing on top of the other’s head, with plenty of air to boot.  It performs its roving functions using a rather pedestrian system of four wheels and manages the high jump using a piston-actuated leg that pushes itself, like the Incredible Hulk, off the ground.

What does this mean for anti-robot paranoids?  It means you best make sure your walls and fences measure at least 25.1 feet if you want to keep covert spy robots from making the rounds in your compound.  Semi-autonomous, it can be guided by GPS coordinates  for surveying obstacle-riddled environments.  I think you’ll need the human controller to trigger the jump, though, so it’s not all self-reliant….for now.

A delivery date of 2010 is being targeted for the Precision Urban Hopper, at which point it will likely see action performing surveillance missions in urban battlefields.